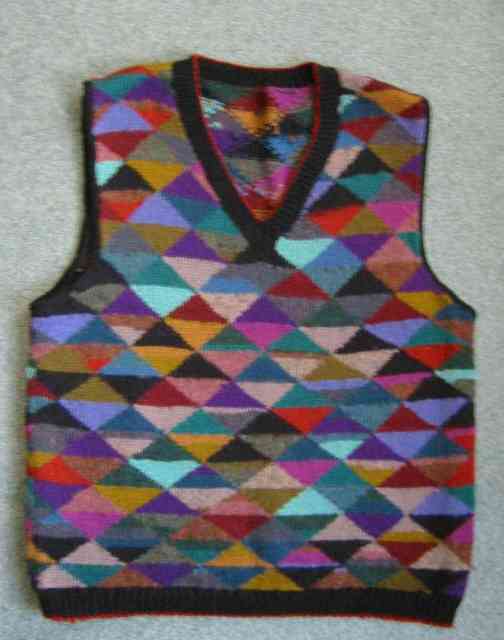 Ahh…the blush of a first love…

That’s what I recall when I first starting seeing Kaffe’s designs. I was so enamored with his colors and his choice of yarns that I fell hard. I had never done any colorwork when I first saw his work, so I didn’t even know the difference between intarsia and Fair Isle. As a young, untrained knitter, I wasn’t daunted by much, so I bought my first Kaffe pattern. I bought a vest kit with multi-colored triangles…actually, it wasn’t a kit, and the yarn store didn’t have one of the colors I needed, so it required me to substitute one of the Rowan Lightweight DK colors for a less than adequate alternative (see if you can guess which color doesn’t belong).

I also never checked gauge back then (I still don’t…but I can rip out and reknit a lot faster now), so my sweater vest ended up being a little too small. I blocked the hell out of it and ended up with a wearable sweater. Thought you might want to see one of my first attempts at colorwork.

After I realized that intarsia wasn’t that difficult, I did one of my favorite sweaters ever. It was a $325 kit for Antique Jacket by Kaffe. I got it on sale for $290 and worked like a fiend to get it done for a friend for Christmas. It was such fun to make, it makes me want to do it again.

Alas, I’m no longer friendly with the recipient, and I never got a picture of that sweater. But the best lesson from those early Kaffe experiences was that no project, no matter how difficult it looks, could ever stop me from trying it.

Finally, for today’s post, I’ve had some requests for a standard “beanie” type hat, and fortunately Mark Thraikill has done all the design work on a hat he says is all the rage in London right now. Below is the link to the pattern (with picture).