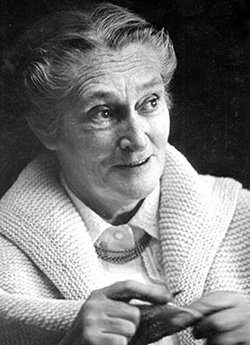 There aren’t many stars in the knitting universe…so what does it take to make a name recognizable by almost all knitters?

In the 18 years that I’ve been knitting, there have been only three names that I can name that are inarguably recognized as knitting stars,

These knit designers have created a large following and inspired a large number of knitters to take up needles.

Elizabeth Zimmermann is one of the pioneers of knitting inspiration. It wasn’t her brilliant designs that brought knitters to her, it was more her philosophy of knitting that gave new knitters the courage to try things. She helped transition knitting from a time when it was a chore to a time where knitting could be something a person chose to do for fun. Personally, I don’t subscribe to some of her ideas. I have no aversion to purling, and I think most of her knitting patterns are devoid of any style. However, I heartily agree with her spirit of adventure in knitting, and the undaunted, unapologetic way she encourages knitters to be pioneers themselves. That’s what makes her great.

As for Alice and Kaffe, both of them pursued knitting fame in a different way than Alice. They both took a specific knitting technique, and made it an artform. They both brought joyous amounts of color into the knitting world. Alice through her incredible Fair Isle and Aran designs and Kaffe through his incredible intarsia masterpieces. Both of them were incredibly prolific in their designs, and they both inspired knitters around the globe to spend inordinate amounts of money on books and yarns to make their own pieces of art.

Again, Alice and Kaffe diverge in their knitting styles. Alice’s designs brought a precisioned and detailed eye to both Fair Isle and Aran designs, while Kaffe encouraged a more reckless approach to throwing as much color and patterning as he could into his sweater designs.

Now I’m sure that there are a number of other well-known hand-knitting designers that you could name, but I put them in the category of sub-stars.
Knitting Sub-Stars that I can quickly list are Debbie Bliss, Jo Sharp, Ron Schweitzer, Penny Straker, Michele Wyman, Lily Chin, and Jean Moss. All of them (and many more) have made huge contributions to knitting. But none of them have broken through so that they are known by their first name only as Kaffe, Elizabeth and Alice have.

New Star Auditions
==============
We are in desperate need of a new Knitting Star. Alice is busy with her lawyers, Kaffe has seemingly left knitting to his protege, Brendan Mably, and Elizabeth has passed on the crown to her daughter Meg Swansen. Today’s entry is a call for a new star. The knitting community need someone to follow and worship. Someone who will appeal to a wide audience of knitters.

I submit that Carol Lapin could be a possible candidate. Here are her qualifications:

1. She has been designing for a long time. In fact, one of her designs is in Scottish Collection…the widely sought-out Alice book from the Broadbay days. For those of you who own that book, did you know Carol is the model for the entrelac sweater in the book?

2. Carol’s designs are always stylish and sophisticated and they continue to get better and better. Her most recent designs in the Jamieson Simply Knit book are artful to say the least. Metamorphosis, one of her new designs in the book is absolutely beautiful and well designed. People who haven’t even gotten the book have been ordering kits for that sweater already, despite the $128 cost.

3. The editor at Unicorn Books who was partly responsible for bringing Alice to star-status, has been pushing Carol’s designs very strongly. He is an amazing publicist as well as editor, and the combination could be very effective.

4. Finally, Carol continues to be very prolific in her designs. She has recently completed a multi-color overcoat-like garment that is truly stunning.

Given that I’m a personal friend of Carol’s, my opinion is obviously biased. But truthfully, it was my love of her designs that brought us together as friends originally. I’d like to hear if there are any other stars out there who you think are ready to pop out.

Knitting Progress
I had to say, I’ve finished the back and I’m almost up to the collar shaping on the front of the Sister Sweater. This picture may look like I’ve done even less than the last picture. That’s because the last picture only showed the almost completed back, and not the incomplete front chest section. 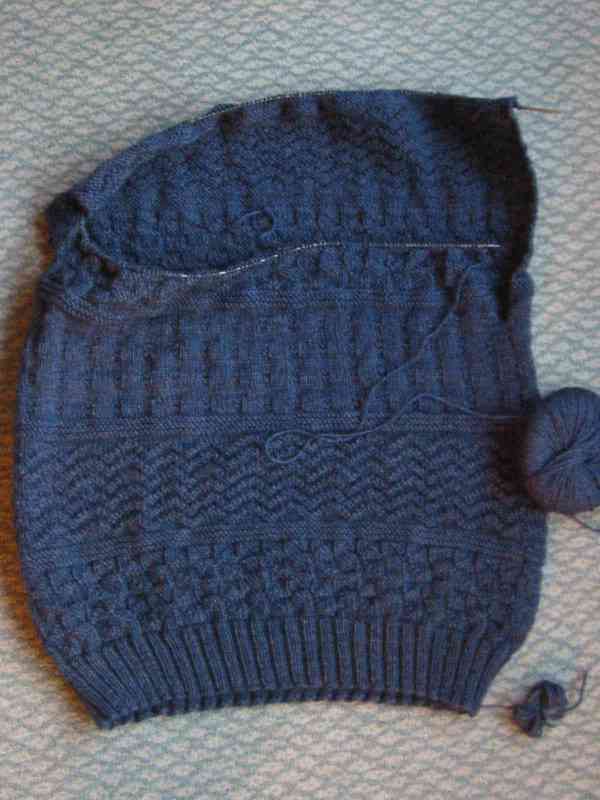 I’ll finish the front and start on the sleeves this weekend (hopefully).