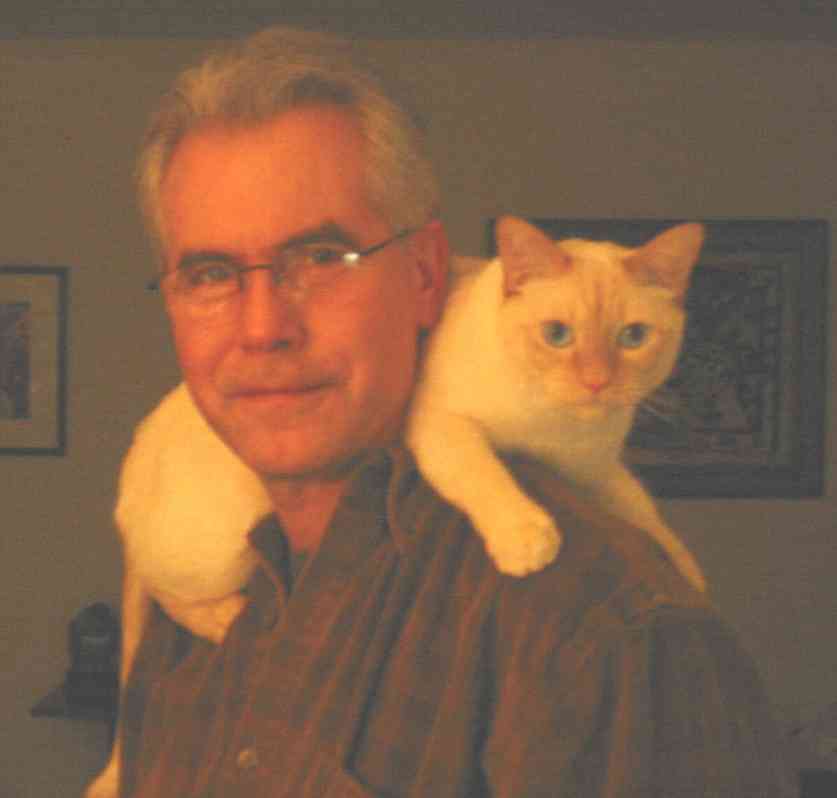 I am definitely not a fan of confrontation.

In most situations, I will avoid any type of awkward or uncomfortable situation. I hate when someone at my table in a restaurant complains about their food. I am very uncomfortable when I get reprimanded in a business meeting. I don’t enjoy when friends argue or bicker with me or others.

I’ve also gotten very good at calming people down. Soothing raw nerves and facilitating a peaceful resolution to problems is a forte of mine.

That being said, I am definitely not afraid of on-line flaming.

The first time I was ever “yelled” at in an on-line situation was very uncomforatable for me. I’ll never forget it. I was chatting with someone on-line on AOL, and he thought I was interested in him sexually. When I told him I wasn’t, he insulted me and told me I was an asshole for “leading him on.”

I didn’t like the feelings I had during that interaction, and I started to deal with them as I would normally do in real-life social situations. I tried to reason with the guy, I tried to calm him down, I tried to joke with him and cajole him into liking me again. It didn’t work…and it left me feeling frustrated and angry.

That was the last time.

I’m very grateful to that person. He taught me one of my favorite on-line lessons I’ve ever learned…that instant messages, chat room comments, group-list insults and e-mail flames can NOT hurt me. Now, I know many of you have known this forever, and this would have been no revelation to you. But to me, it was a true epiphany. In my on-line life, I no longer had to play the peacemaker. Placating angry or unreasonable people on-line was no longer my job. As you can imagine, it was a big relief.

Knit Flaming
So, what does this have to do with knitting?

A couple of things.

First, it annoys the hell out of me to have someone on the Knitlist post a message with “Please don’t flame me, but…” Comments like that make me want to take a blow-torch to them until they’re charred. Not really, but I want to ask…”what are you worried about?” I have to temper my annoyance with the fact that I haven’t learned how to be unafraid in real life, so it’s unreasonable to hope that all Knitlist posters will have learned that in their on-line life. Now, if I could just extrapolate this fearless concept to my real life.

On the other side of that, Marilyn’s Blog is one of my favorites because of it’s funny, unapologetic and fearless approach to writing about knitting. With an attitude of “bite me” to naysayers, she is my hero.

Knitflame List
For those of you who are unaware, there is a list called Knitflame. It allows for flames and complaints…the kinds of posts that aren’t allowed on other lists. When I first heard of the Knitflame list, I thought I would like it. It sounded like a list for people like Marilyn. I pictured it having caustic humor and anti-knitlist comments that would be close to sacrilege.

I finally decided to check it out. I am highly unimpressed. I read through the last month’s worth of posts and at best the posts were boring, at worst, scary. I’m convinced some of the members are paranoid in the psychological sense. The whining and complaining seemed endless. I’d spend more time with my clients if I wanted to hearing whiny complaining all the time. What a tired list this seems to be. I’ve asked some of the members who I respect for their opinion, and I’m open to having this be a funny daily read.

I’ll stay subscribed for a while to see if it gets any better, but for now it’s not a list that I’d recommend unless you need an excuse to go off your meds.

Sister Sweater
I’ve finished the front and collar and started the first sleeve. I hope to have a lot of knitting time this week, but I don’t hold out much hope. 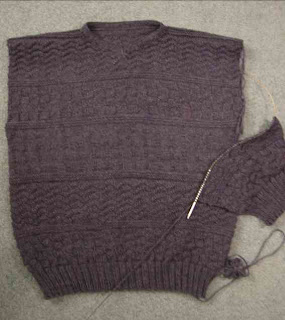 Family Picture
A few of you have asked about Thaddeus, so I thought I’d show a family photo I took of he and Gage. Sorry for the quality, but both he and the cat looked good in the same picture, so I had to settle for poor photo quality. 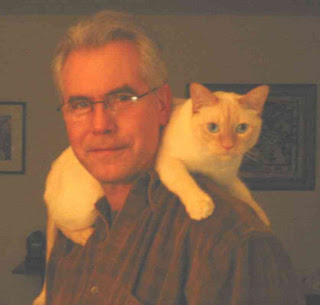 Gage loves to be carried around on our shoulders…who needs a Vegan Fox when you have a Gage Stole.