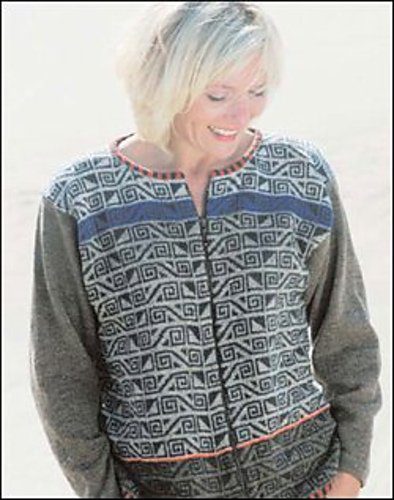 Knitting can make for a very small and comforting world.

I mentioned in an earlier blog entry, after my friend Kathy M. mentioned the talented designer, Marianne Isager, I just had to check out her work. Pinnsvin has one of her books for sale, Afrika, and some kits of Isager’s work. Pinnsvin even has an English version of their web site for folks that don’t speak Danish.

I ordered Afrika and asked if I could also get Inka, her first book. Afrika is on its way and Inka is out of print.

Having mentioned that earlier, a kind reader (thanks Mette) located a woman in Norway who was willing to trade her copy of Inka, in exchange for a Danish book of children’s knit patterns. Mette arranged a three-way swap with me and this Norwegian whereby Mette bought the Danish book, and sent it to Norway. Mette has now sent me the Inka book in exchange for the three Jamieson books (including the new Simply Knit book).

The kindness of knitters is sometimes astounding. I am incredibly grateful that now I will own both of Marianne Isager’s books.

Then, if that wasn’t great enough, another Danish knitter sent me a link with the Danish/English translation of almost any word you could find in a Danish knitting book. I have been blown away by the Danish and Norwegian knitting folks.

After working a swatch in the antique gold color Jamieson DK yarn, I didn’t like the patterning. I’ve modified it and like it a lot more, but the picture I took of it sucks, so I won’t post a picture until I’m a little further into the garment.

DONE, DONE, DONE. This is a pictureless blog entry because my sister is still reading. I will say, it came out very well, and she will look good in it. I’ll be meeting her at my mom’s house this Saturday to give it to her and adjust the size if necessary. Can’t wait.