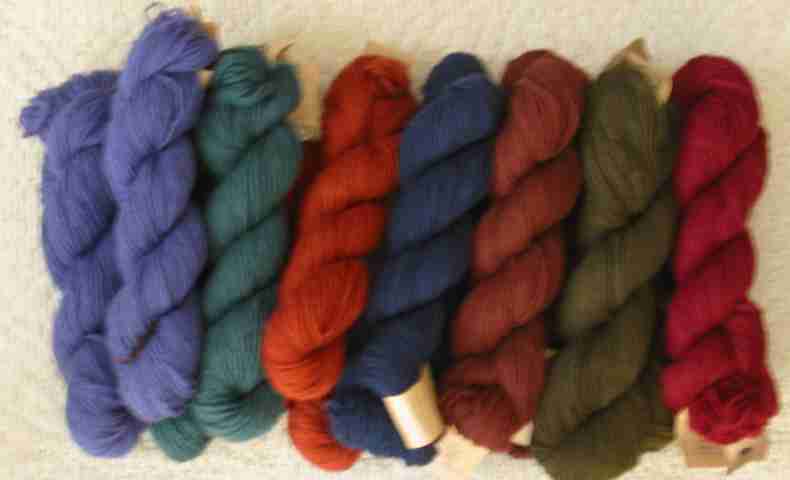 For those of you who are interested in making a Willie Warmer, I have asked my web-friend Robert if I could post his modifications to the Pot Wench’s original Willie Warmer pattern. I also modified Robert’s version of the…er…garment, so I’ve included my adaptations too.

Click here for the pattern. That pattern also has a link to the picture of my Willie Warmer done in Rowan Kid Silk Haze (someone said they thought the color was called “Juice”…how inappropriate is that?)

New Design Concept
After I carefully reviewed the Brooks Brothers woman’s cardigan all last week, I went to the yarn store this past weekend and picked up some different colors to make a men’s version of the sweater. I’ve swatched the yarn (Jamieson DK) and I’ve charted out the blocks, and various pattern stitches that I intend on using.

I didn’t feel like carrying all this yarn with me to Baltimore, so I’ll start it this weekend when I get back home.

Current Project
When I was packing for the week, I picked up the alpaca bedspread/coffin cover. I figure I can try to catch up on my “one inch each week” goal for this. I started it around the middle of December, so I should have about 12 or 13 inches done. I’ve only gotten about 8 inches so far. Once I’ve got it up to 12 inches, I’ll post a picture of it.

Contest Winners
Well, you all know who the winners were, since I announced them yesterday, but here are the prize selections:

Congratulations again, and thanks everyone for a fun first contest. It makes me want to have more. Especially since my limerick didn’t win on Wendy’s Blog.

Is Mercury in Retrograde?
I don’t know much about astrology, but someone told me that when Mercury is in retrograde, communications get all messed up. Well, first of all, Haloscan (who does the comments on my blog) messing up all weekend and flickering on and off all day. And now I find that my company e-mail is blocking any Yahoo Group mail, and I’ve been bouncing e-mail to all my groups. What a pain.