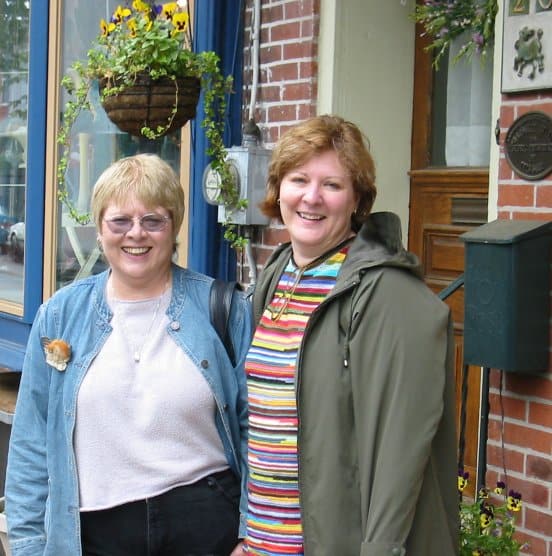 Who would have thought meeting a curmudgeon could be so much fun.

Sunday Visiting
My Tomato Factory/Simply Knit friend Kathy and I got the opportunity to meet Marilyn of Knitting Curmudgeon fame.

I’m not sure if you’re like me or not, but I always over-idealize folks who I’ve never met, and I’m almost always disappointed when they don’t match the image of perfection I’ve concocted in my mind about them. They never seem to turn out quite as smart, or quite as funny, or quite as fascinating as I expect them to.

Marilyn had some pretty extraordinary shoes to fill, since I had never met her in person, and only knew her through her blog and via e-mail correspondence.

I have to say, Marilyn is as clever, witty and sharp-tongued as I had imagined her to be. The prize was how normal she is. And I don’t mean “normal” as in “pedestrian”, or “boring”, or as she might construe it, the opposite of “rare”. I mean she really is a real person. She’s extremely down-to-earth, and straightforward. and easy to be with.

Overall, it was nice being with two of my people…knitters.

Marilyn and Kathy also have very discriminating eyes for knit design. I took advantage of that to ask about my new sweater design.

Marilyn and I agreed that I need to change the ribbing color, but that the sweater will look fine when it’s all done. 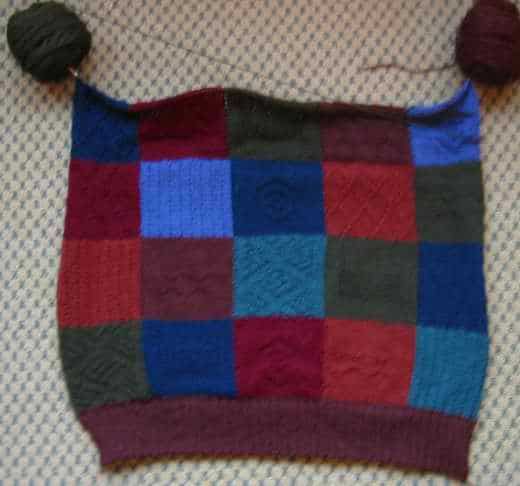 Marilyn also took a picture of Kathy during the meeting, at which point my camera battery promptly died (the two occurrences had NOTHING to do with each other), so I have no other picture to post of our illustrious first meeting. 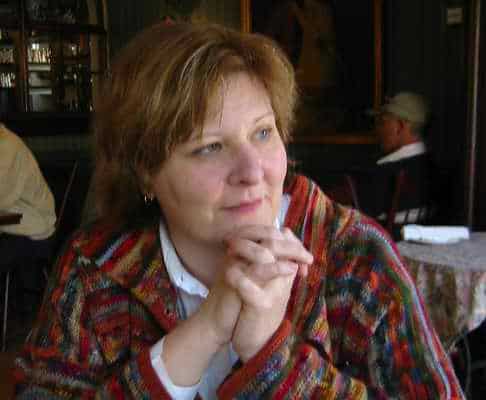 It’s not a great picture of the sweater, but Kathy (the Koigu Queen) is wearing a magnificent jacket in crocheted Koigu. Amazingly beautiful. Also, for those who don’t know Kathy at all, she was one of the designers at Tomato Factory, and she was also formerly an owner/designer at Simply Knit.

Chock-a-Block Cardigan
I am so grateful for all the praise, suggestions and ideas for the colorway on the new cardigan design.

One thing I should have mentioned in my preferences for colorwork. I won’t use black as the background for a multi-color garment. I personally think it makes a sweater look too commercial. I’ve seen it used very successfully, but I just don’t find it to be a viable solution.

Matt of ThreadBear Fiber helped me out enormously by doing graphics to show my color combinations with and without certain colors. He and I think very similarly in terms of traditional color mixing, so I was very grateful for his help. Look at what he put together for me…amazing.

This picture shows three of the five graphics Matt used to show me how darkening the teal color (and the lavender) would make this an overall richer, more coordinated color combination.

He also sells some fine yarns (including Jamieson DK and Koigu) at internet discounted prices. You have to check out his blog and site if you’re in the market for yarn (a shameless promotion of his site was the LEAST I could do for his help and advice).