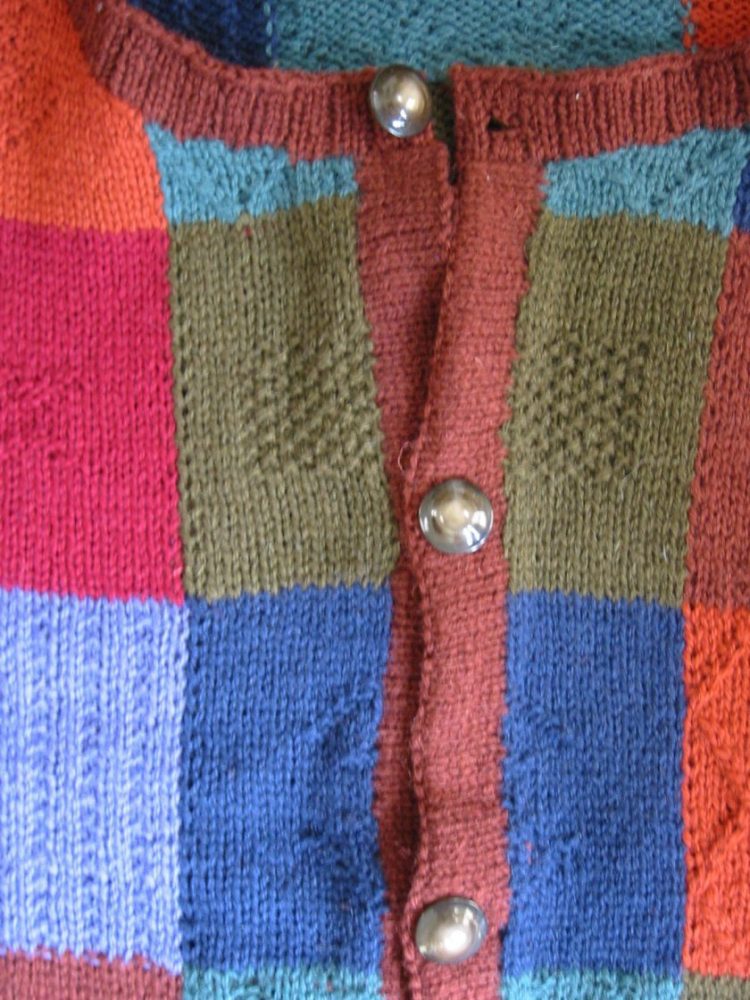 Finishing a garment well can make all the difference in terms of how I enjoy the result of my knitting.

The worst part about this sweater is the fact that it is not at all photogenic. As I’ve written before, I love wearing this sweater and it gets more compliments from people whose opinion I respect than any other sweater I wear. I tried once more with the new camera, and that didn’t help either 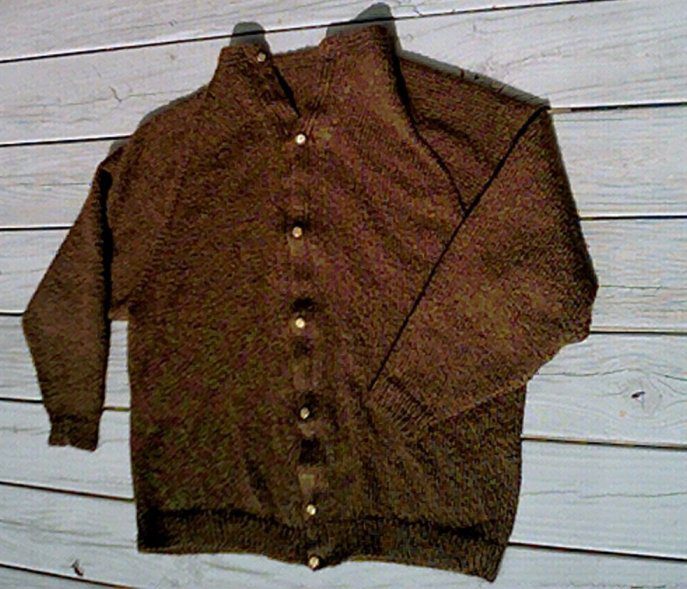 The gros grain ribbon helped a lot (I hand stitched it in with a tacking stitch like you’d use to do a hem), but after finishing this sweater and sewing in the buttons on the Chock-a-Block cardigan, I’ve realized that I don’t do button bands very well. I find that I have to constantly make adjustments to them and even then, I’m never fully satisfied.

As mentioned, all the buttons are on, and I figured I owed all those folks that suffered through the design decisions a few finished pictures of the sweater. First of all, here’s one that shows the buttons and a close up of the button band. The buttons don’t match any color in particular, but they end up adding style without detracting. Exactly what I look for in a set of buttons. And of course, thanks to Marilyn, on all her advice with buttons. 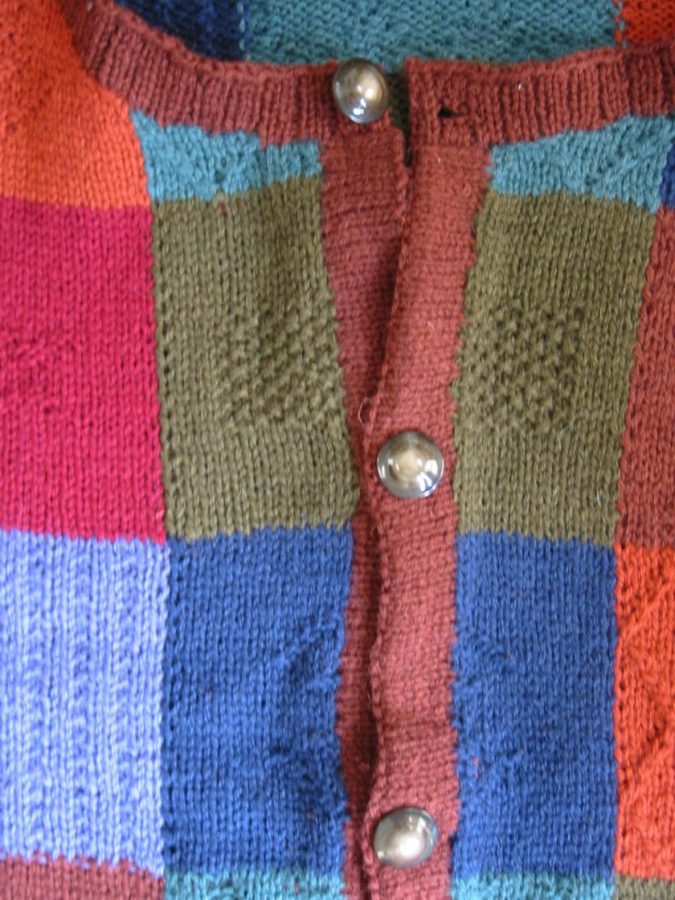 And here are a couple of pictures with me wearing this final creation. You’ll note that it’s shorter than a standard men’s cardigan, so I will make the pattern so that it includes two sizes, this one and a larger one. 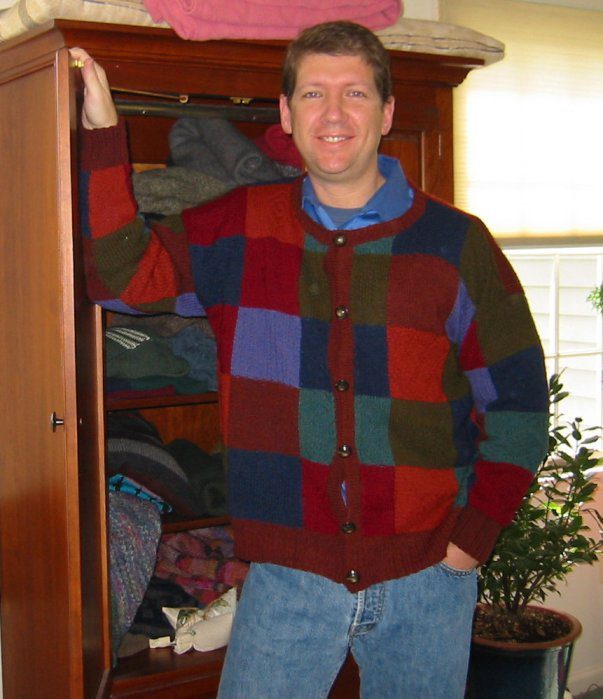 You can also glimpse some of my other sweaters in the armoire behind me where I store my sweaters.

Finally, here’s another one that I thought looked good. 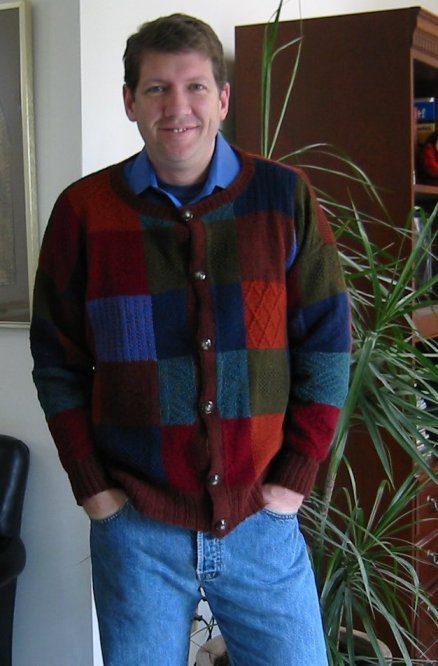 A while ago, I decided to try to teach myself quilting. I wanted to machine stitch the pieces, so I bought an old Sears sewing machine. I picked one of the most complex patterns and realized I hate using a sewing machine and gave up quickly. Then I decided that maybe hand stitching would be more enjoyable. I’ve gotten eight squares done so far, and maybe some day I’ll pick it back up and make the quilt that will go with my alpaca bedspread. 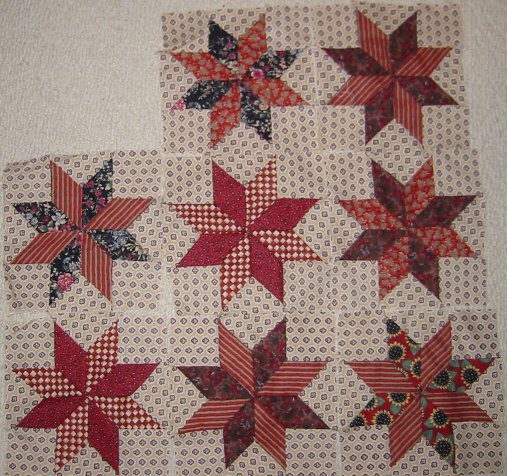 While I haven’t worked on this in over a year, I did enjoy the hand stitching much better than the machine work.

Well, I’m off to Baltimore for a project team celebration. You’d think I’d stay over for the MarylandSheep and Wool festival since it’s tomorrow, but I would prefer to spend some time with Thaddeus. Now that you’ve seen another picture of him, you know why.