I do the majority of my knitting in a bed.

When I’m in the hotel, I usually sit up in bed watching television and knitting. When I’m home, I prop myself up on multiple pillows, and knit while Thaddeus plays on the computer which is in the little alcove in our master bedroom. I also knit on the couch in my living room and in my big, soft, leather chair in my t.v. room.

All that being said, I haven’t done a lot of knitting the last two nights in the hotel. Work has been frantic, and kept me in the office pretty late. I’ve also been getting up early to run, since vacation is scheduled for next week and the week after. I have to look good in a bathing suit.

So all-in-all, I get in a row or two each night and morning, but it’s not progressing as fast as when I’m home.

Yes, you read right. I’ll be on vacation for two weeks. The time off from work is sorely needed, and I’m looking forward to it with much joy. I’ll be spending 8 days in Martha’s Vineyard (Edgartown, for those of you familiar with the island). Thaddeus’ sister and brother-in-law have a house up there that is just perfect. We’ll fly up there on Wednesday, and fly home the following Thursday. I can’t wait.

Don’t worry, we have a very responsible teenager come in to take care of Gage and water the plants while we’re away.

As for knitting, I usually get the opportunity to knit while I’m there, but not as obsessively as I do at home. Fortunately, I’m home for a few days before and after Martha’s Vineyard, so I should make pretty good progress on the current design and hopefully even start the next one.

I’m debating on whether I will bring the Mini Chock-a-Block with me. Since I’m using around 20 different colors, I’m not sure I want to schlep all that yarn with me. I’m thinking I need to bring one of my other projects, or buy some more patterned sock yarn before I go and just work on socks.

I don’t think that I will have much access (if any) to the internet while I’m away, so the blog will also go on vacation. But don’t worry, that won’t be until next Wednesday.

As I’ve mentioned before, I often knit in public and I will probably be knitting in the Philadelphia airport and on the plane up to Massachusetts. If we had decided to drive and take the ferry, I would also have been knitting on the ferry. Associated with that thought, I leave you with a funny cartoon that Nicky, one of the blog readers sent me. 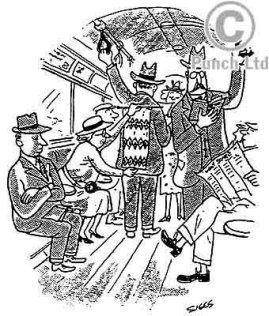 It wouldn’t be outside of the scope of my twisted reality to do something just like this.