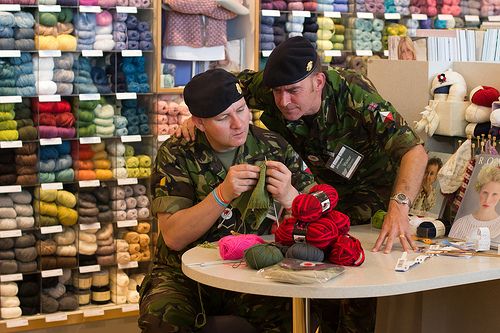 Over the course of the last two weeks I’ve had the opportunity to show two people something about knitting. Both of them were positive experiences, although very different as well.

The first one was my niece. She’s 12 years old, and she has always been fascinated with my knitting. Since I was making her a pair of socks while on vacation, she asked me to teach her to knit. The socks were a perfect training ground since they would be worn by her, they only had to be knit with no purling and they were done in a self-patterning Regia yarn that seemed to be very satisfying for her.

She picked it up very easily and actually knit pretty well right off the bat. She loved the fact that she was participating in the creation of a sock that she would wear. Her stick-to-it-iveness wasn’t great, so she’d knit a few rows and then hand it back to me. Overall it was an enjoyable experience to pass on some knowledge to someone who may some day be ready to devote some time to knitting.

The second experience was a much more exciting one for me. One of my coworkers in Albany brought his wife to Albany from their home in Milwaukee. She does a lot of crocheting, and some knitting. She was making a cotton bathing suit in crochet like one she had seen in a store. With crochet she is very talented and can design a garment on the hook. At knitting, she’s not quite as talented.

She needed to make a cord to secure the bathing suit in the back, so she bought a plastic knitting noddy in a local fabric store in Albany. I told her that she’d be better off just doing i-cord because it would be quicker, and she could more easily regulate the number of stitches and the gauge of her cord.

She didn’t know how to do i-cord, so I tried describing it to her, but she didn’t understand it very well. The next morning, I met her in the concierge lounge and gave her a lesson in i-cord. She understood immediately how it worked, and agreed it would be much easier than the knitting noddy. I also loaned her the double pointed needles so she could make the i-cord in the hotel while I was at work.

Her enthusiastic desire to learn and try things made teaching her very exciting for me. I could only hope that everyone would have such excitement for the craft.

As usual, work and hotel life haven’t let me get an enormous amount of knitting done, but I have gotten up to the fifth row of blocks (out of eleven). I’m trying to get enough done so that I can finish the front of the sweater this weekend, but we’ll see.

Everyone I show this garment to is loving the deep and vibrant colors, and I haven’t gotten sick of them yet either. Although, I have to admit, there are certain stitch patterns that require a little more concentration than I care to give, and when I have three or four of those blocks in a row (as with row four), I find myself hoping to finish that row of blocks more quickly.

I just got an e-mail for a co-worker of mine who had relocated to Rhode Island over a year ago. He and his wife had their first baby, a boy name Zachary Joseph.

I stopped at the local fabric store, where they also carry yarn, and picked up some Patons Baby Beehive in a typical baby blue color.

I think I’ll make a nice blanket for his new boy.

Q. Do I have a pattern for the Oak Leaf sweater or the Fair Isle “bathrobe” in my blog entry from last week?

Q. How many amorous replies have I gotten to my blog.

A. Honestly, none. Knitting must not inspire the lust in people.

Q. Am I crabbier in person than the Knitting Curmudgeon?