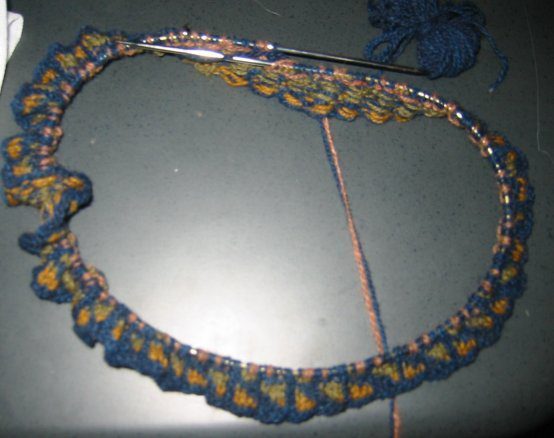 I can’t tell you how comfortable it is being back among multiple knitting projects.

I’ve been chomping at the bit to start the new Fair Isle vest project I bought at Stitches. Now that there’s no pressure on finishing the second Regia sock, and this arrived in the mail last week: 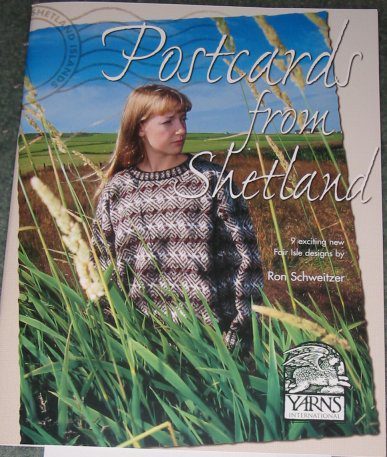 I decided to cast on for Ronas Hill.

I’ve only finished the first inch, so there’s not much to see, but I have a little close up as well.

Even though I’ve only done an inch, I’m very glad that the fiddly part of starting multi-color ribbing is done. I’m hoping to fly through this sweater.

I was going to bring it to Albany as my “during the week” project, but believe it or not, I don’t have the correct circular needle in my stash anywhere (this one requires a US4). I’m sure there’s one in the house, I just couldn’t find it.

I love the Shetland 2000 yarn. It’s softer than most Shetland I’ve worked with before, and I’m in love with the colors. I do have to say that it has some of the worst skeining tangles I’ve ever dealt with. Trying to spin these hanks into center-pull balls was a nightmare. Tons of tangles and painful unravellings.

Just because I started a new project with two other projects actively being worked on, I still had time to do about 2 inches on the second sock. Since I didn’t have the correct needle for the body of Ronas Hill, I decided to bring the sock with me to Albany, and I’ll be working on it throughout the week.

Hopefully, by this weekend, I’ll have a completed pair of bright multi-colored socks.

I’ve got a benefit dinner this coming weekend with a silent auction. I donated one of the items in the auction which is a FiberTrends felted handbag done in Noro Kureyon. It’s bright and multi-colored, so I figure if someone wants to meet the knitter, I can show off my multi-color socks as well.

About 19 years ago, I was a poor, starving banker wannabe, working in New York City for about $15,000 a year, and Thaddeus was a mill worker in a rubber factory. We were struggling to get by financially, and I needed to come up with a birthday/Valentine’s day gift for Thaddeus that was incredible, but didn’t cost too much.

A friend had taken a group picture, which included Thaddeus and I, and we both looked good (or at least I thought I looked good). I decided to get a cropped version of the picture put into a simple Duane/Reade frame (Duane/Reade is a New York City pharmacy, like CVS if you know what that is). I didn’t have a copy of the negative, only the picture.

It turns out that to have a negative made, and create a cropped version of the picture cost almost $20, which was way over the budget I had hoped to stay under.

Fortunately, it didn’t break the bank, and Thaddeus loved the picture as much as I would have hoped. 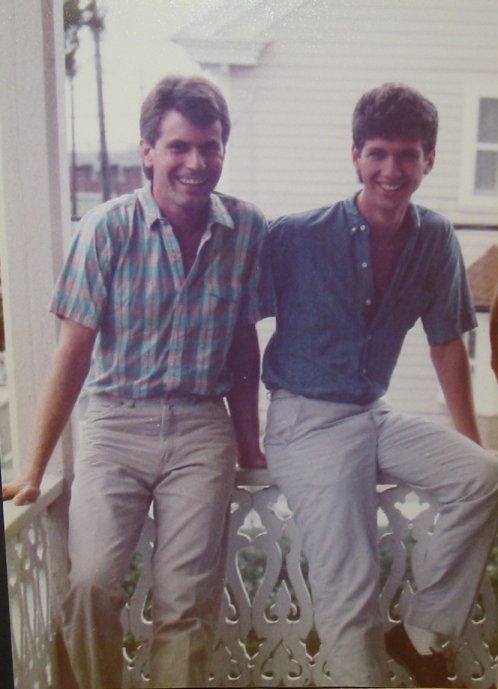 While it’s not really a wedding picture, it’s one of the earliest pictures of Thaddeus and I that I have.