Time For a Blog Contest

It’s been a while since I held my last blog contest, so I figured it was about time to have one.

This contest is going to be a relatively simple test, that requires some thought, but not a lot of research or analysis.

E-mail me with a list of what you think are the top 20 search term, (single words only) that most commonly bring folks to my site.

All entries should be e-mailed by midnight of Friday, February 13th, U.S. Eastern Time.

You should also check out Wendy’s site, since she’s having what I call a “repulsive cat love” contest for Valentine’s Day. But as always, she has good prizes.

There will only be one winner of this contest, and that winner will get ten hanks of Jamieson Spindrift (jumper weight Shetland) in a very dark navy color. 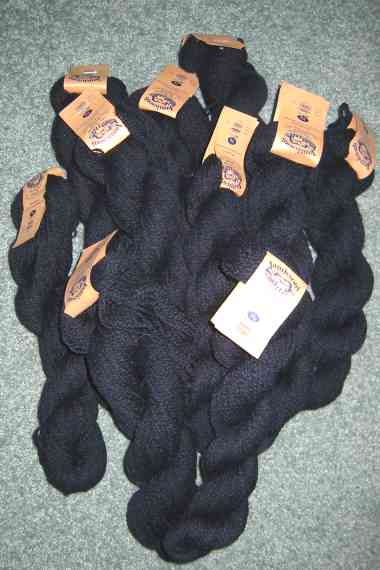 I finished the lower ribbing and knit a couple of inches on the right side leg of the undies.

It’s moving along well, but I didn’t feel like a picture would be overly useful.

Sean wants to see me model the final garment (Aubergine seconds that request).

We’ll see how I look in them, and if posting such a picture would cause an uproar to rival the Janet Jackson boob affair. If I look fat or otherwise unattractive, there will be no picture.

If the picture is too revealing, I won’t post one. Other than that, I will post a picture.

Aubergine also wants to know how I will know if they’re clean since they are light oatmeal colored.

I don’t know what he does in his underwear, but I think cleanliness will be easily discerned with this color. They are also made with superwash merino, so I don’t think I’ll be handwashing them.

Finally, Shannon mentions that the scarf that Nadine was knitting at the get-together sounded like a “Loopy and Luscious” scarf from Knitty, Winter 2002.

If that wasn’t the exact pattern she was knitting, it was very close. Here’s the link to the Knitty scarf. Nadine’s was black background with very vibrant colored thick loops, so her scarf looked a lot more dramatic, but it seems like the same idea. 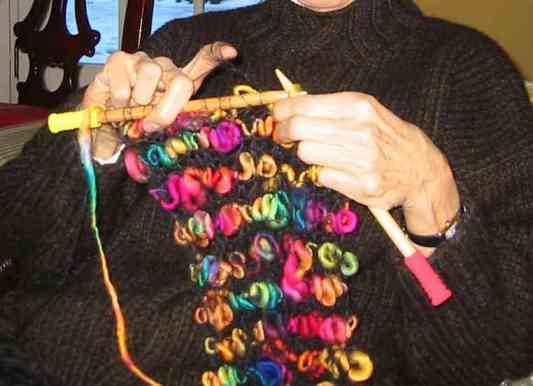 I would have include her face (or pictures of other folks at the get-together), but they would have tarred and feathered me if I published the pictures that I took…they didn’t come out well at all, except for one picture of Lisa with a mustache.