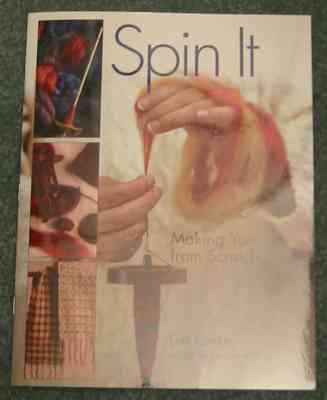 This weekend was jam-packed with fiber-related activity.

I didn’t do anything on the red baby blanket (so much for tons of fiber-related activity…but wait!…there’s more).

I’ve decided that the red baby blanket is going to be my Albany-only project, unless I’m totally bored at home.

As Carol S. mentioned, I spent a large part of my time spinning this weekend.

Friday night, Thaddeus has a regular engagement for about 2 and a half hours. During that time I had carefully scheduled to fill every moment with spinning more of the Corriedale cross.

Seconds after his departure, I sped up to the guest bedroom/craft room.

It wasn’t five minutes of spinning, when the cord that makes the Scotch brake work, broke (can brakes break?)…ARGH!!!

Now what was I going to do?

I quickly picked up one of the coned yarns that I got from Alan to sell on eBay. It’s a very soft, very fine, boucle sort of yarn with a little bit of stretch.

I know it’s a good yarn, because it’s a Filatura di Crosa yarn, and the color is soft charcoal.

I started to knit a swatch, and then realized the “swatch” was just about the perfect width for the back of a man’s sweater. At 5.5 stitches to the inch, I didn’t want to waste my knitting, so I continued knitting (just plain stockinette).

Then I had three realizations:

1. Knitting this yarn at this pace would take forever.

2. The piece was ending up being a little too narrow for my growing waist.

After a little trial and error, some handknitting and some finishing, I ended up with this. 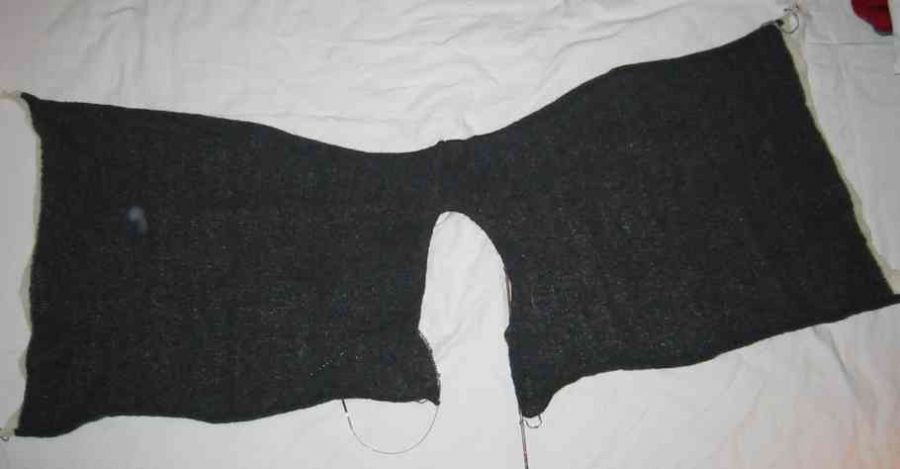 Hard to say what exactly this is…so I’ll describe it. It’s the front and back of a man’s crew-neck pullover, with one shoulder seamed together.

While you can’t see it, there’s also waste yarn at the bottom, which will be removed when I had some ribbing to the bottom. I was amazed at how much knitting I could get done in a couple of hours. 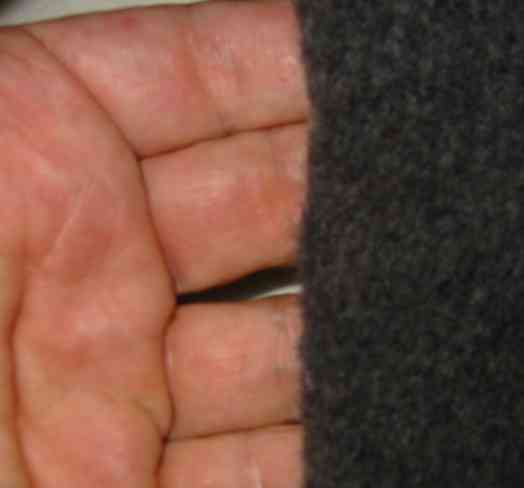 I’m not sure if this closeup picture helps at all, but the resulting fabric, both hand and machine knit, is soft and slightly furry. It reminds me a lot of a commercial cashmere sweater. Light, drapey fabric, and soft as a baby’s ass.

Thaddeus suggested a couple of substitutes for the Scotch brake on the spinning wheel, and we ended up using dental tape. It was surprisingly successful (although I have ordered an Ashford maintenance kit which includes a new brake cord, so I can fix my neighbor’s wheel correctly).

I was able to finish spinning the second spindle of yarn from last weekend, and using my handmade lazy-kate to ply the yarn. 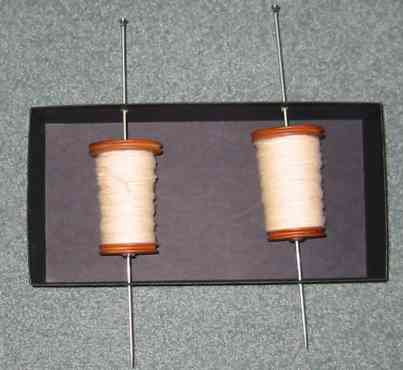 Then I spun up two additional spindles of yarn, and plied that as well. 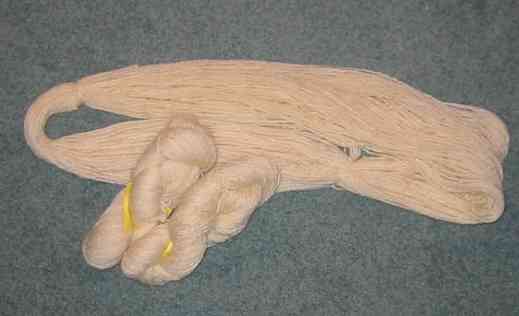 All-in-all, I ended up spinning a total of 14.5 oz. of yarn from the pound of roving I got. The rest of it ended up being waste for various reasons. I’m hopeful to use a higher percentage of the Blue-Face Leicester when I start working with that.

I didn’t get a chance to pick out an appropriate prize for the blog contest, so I’ve decided to start the contest at the end of the week.

Sorry for the tease, but it’ll be worth it.

Stephanie asked a while ago for more information on the homespun (e.g. wraps per inch, etc.)

I think it’s about 11 or 12 wpi, but that’s all the information I was able to come up with (and I’m not even sure I measured it correctly). I plan on measuring the length of each skein when I wind it into center-pull balls (I have this clever little device for measuring fish line that also works for yarn). Unfortunately, I don’t plan on winding it until I’m going to knit with it, and that won’t be until after I’ve ordered another pound of it, and spun about half of that.

By then, I hope to have spun enough to make a man’s sweater.

Aubergine mentioned that I need to start a pair of entrelac socks.

Ugh…I love Aubergine, so no offense, but I HATE entrelac. I hate the way it looks, and I hate knitting entrelac. You couldn’t pay me enough to knit entrelac. But thanks for the concern and suggestion.