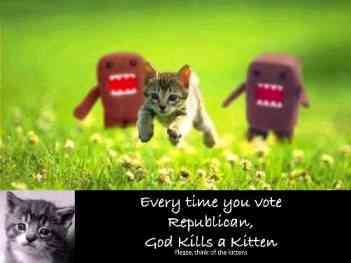 With U.S. elections finally here, I feel like napping until it’s all over. That could be an extended hibernation if it’s close enough.

Last Minute Voting Advice
Carol sent this out to her friends…God, I’m glad she’s a friend.

New Knitting Magazines
Well, I’m not sure how new Knitters is, but it’s new to me.

I picked up these two magazines at Borders yesterday. 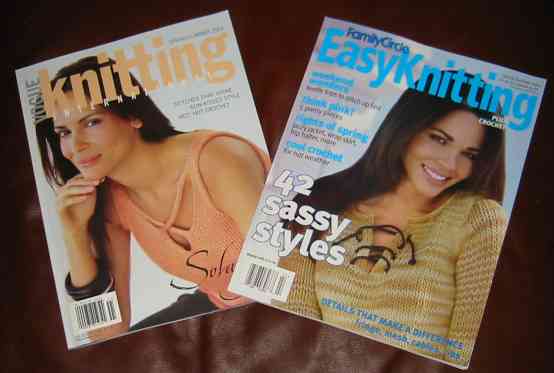 There are about 28 designs, mostly just ordinary stuff. Overall, the only good thing I can say is that there are some excellent colors in the designs.

There is one extremely bad man’s pullover vest (embarrassingly bad, even for Knitters). There is one pretty nice woman’s pullover in orange tweed, with orange lace at the bottom that I liked. Other than that, most of the designs are nothing special.

VOGUEKnitting’s KNIT.1
If I had realized that this was just a big Lion Brand advertisement, I wouldn’t have bought it. Here are some of the clues that I should have recognized before paying almost $6 (U.S.) for this piece of garbage:

There are some extremely ugly designs in this magazine, and even the gorgeous Lion Brand yarns don’t help to make the designs salvageable (that was sarcasm, in case you missed it).

By far, the most hideous piece of shit I’ve ever seen published are a pair of cropped pants by Teva Durham. Done in bulky acrylic, this is by far one of the most useless garments ever created on needles.

Readers’ Comments Questions
Kathy expressed my feelings about RAOK and SP very well (I think she’s my evil twin). I would add one more thing.

The concept of Random Acts of Kindness was an amazingly clever concept when it was first created, and I love the idea behind it. Formalizing the idea with Yahoo Groups and e-mail lists just seems to negate the whole “random” concept. RA’sOK should be like charity…only spoken about by the recipient.

Concerning Rhode Island. Much of my extended family was raised in and around Rhode Island, and to be truthful, I like that little state very much. I was just trying to justify the excessive act of making three baby blankets.

Mary F mentions that the baby must be a cutey (she adds the sycophantic, “just like you” to her comment).

Everyone that has seen her agrees, that Lily Bee is indeed a big cutey. Here’s a picture to let you decide for yourselves. 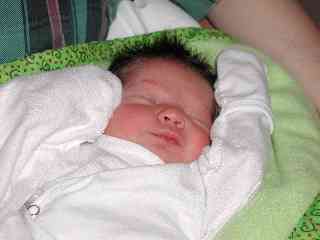 Doesn’t she look a little cold to you?…I think she needs a blanket.