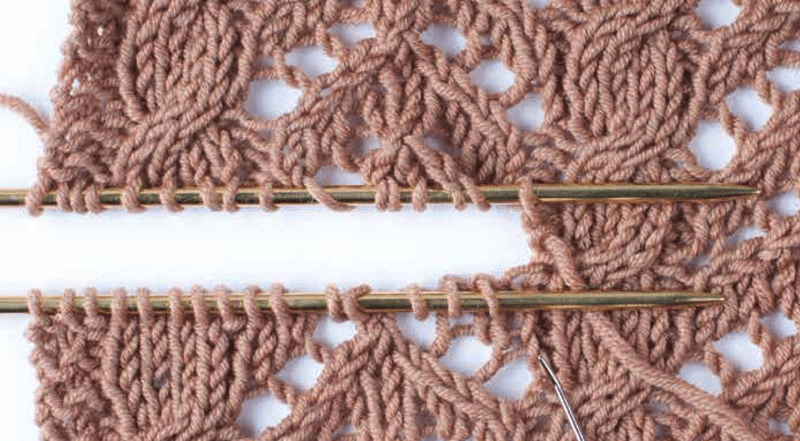 There are two skills that very clearly define who I am as a person. My work and my knitting.

Knitting Emergency Services
I was with a group of friends the other night, and admiring a commercially made sweater that someone was wearing. When the wearer of the sweater turned towards me, I realized there was a run in the knitted fabric from the shoulder, to about halfway down the front.

I noted the run, and he groaned that he was so upset that this happened, since it was his favorite sweater, and he was afraid if/when it got worse, he would have to throw out the sweater.

I very eagerly told him I could fix it, and the entire group of folks that were listening couldn’t imagine this could be fixed.

The sweater owner said it was fine if I could just stop the run from getting worse, and I assured him I could fix it to look like new. He clearly doubted my words, and was happy to hand over the sweater on just the hope it wouldn’t get worse, or it would look even a little better.

Suffice it to say, I brought it back to my hotel. On closer examination, the shoulder seam had unraveled at the neck, and the run was going down both the front and the back of the sweater.

I picked up both runs and secured them at the shoulder seam and reinforced the corner where the collar and shoulder seams merged. After a little finagling with the picked up columns, the sweater looked as good as new.

As silly as this sounds, my ability to fix this sweater, was a source of immense pride for me. I felt so valued that I could use a simple skill to save someone’s favorite sweater.

I can’t wait to present it to him next week when I see him again. It feels almost as if I knitted the damn sweater myself. Not bad for a 30 minute allocation of time.

Current Knitting
I’m almost finished with the next pattern repeat of the third baby blanket. 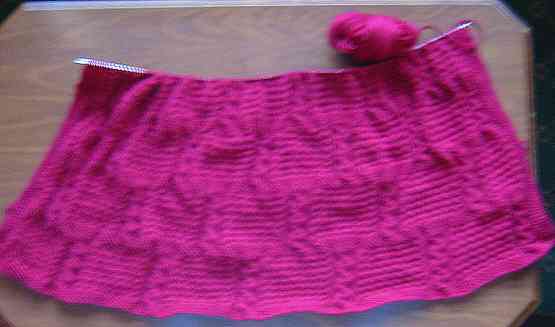 I’m hopeful to make a lot of progress on this, and possibly even finish it this weekend. I’d love to be able to send it out by Monday, latest.

Spinning Workshop
The Princeton Weaver’s Guild is putting on a two day workshop on November 13th and 14th, with instructor Nelda Davis on learning to spin on a great wheel.

Two local spinners (a married couple) are hosting the workshop in their home, as they have dozens of antique great wheels that will be used for the workshop.

I am very eager to have this opportunity to learn some classic ways of spinning. I’m hopeful that the techniques can be extrapolated into my day-to-day spinning.

Readers’ Comments Questions
I brought this on myself. I put a cute baby picture on the blog and got some cute comments in exchange. Crystal’s was my favorite. She gushed over pink cheeks, and then went on to talk about her hopes of having Kerry kick Bush’s ass…lol.

While I’m usually not overly tolerant of cute comments, I figured they would end as soon as a new blog entry, sans baby picture, was posted. I’ll look forward to not being disappointed.

Barb Brown asked about the charity knitting project for AIDS I discussed earlier this year.

I have the yarn and the pattern, and I will be organizing something after the beginning of the year. More details to come.

I will have to look for it at Wegman’s this evening.

My final comment on this kitty-slaughtering abomination of an election, is that I’ll look forward to having the Clinton’s back in the White House in 2008. I love Hillary, and I’m gonna start saving to start my own 527 group.