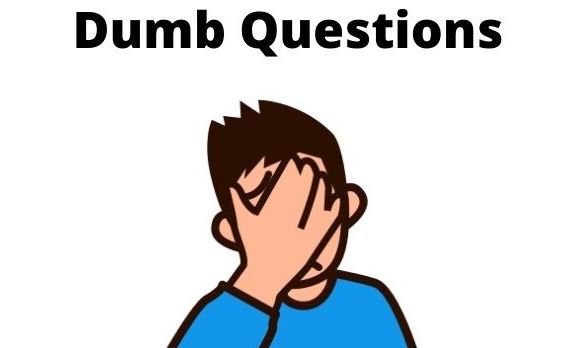 “…the term used for an extended debate in the Senate which has the effect of preventing a vote.

Senate rules contain no motion to force a vote. A vote occurs only once debate ends.”

For the non-Americans who read, the filibuster is used mainly by the minority party, typically to oppose voting on candidates for judges. Since our judiciary has been able to rein in some of the conservative Redumblicans, the Redumblicans are trying to eliminate the filibuster as an option.

Do I oppose the elimination of the filibuster in the U.S. Senate for partisan reasons, or because I think it’s the wrong thing to do?

I have to ask myself honestly whether I think the filibuster is a useful tool that helps maintain checks and balances, or whether I resist any change that might make the judiciary more conservative. If a Democratic majority in the Senate tried to do this while Bill Clinton was in office, would I feel differently about it?

To be completely forthright, I don’t know that I can separate my feelings enough to know.

However, I do think the the checks and balances we have in this country are like a finely balanced mobile, and making such a large change to the current rules might imbalance the whole process.

Other Weekend Knitting
In addition to the progress I made on the baby blanket, I also did a little work on the plush and cushy sock. 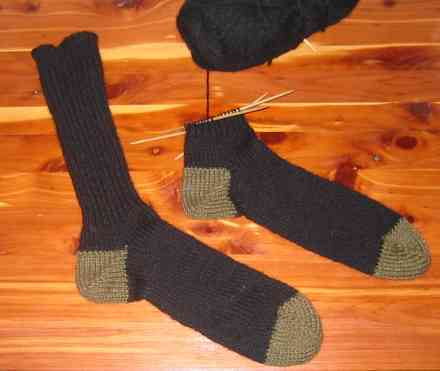 You’ll note I was able to complete turning the heel, and even started a little on the ribbing.

Spinning
Believe it or not, I also got in quite a bit of time on the spinning of the grape Merino. 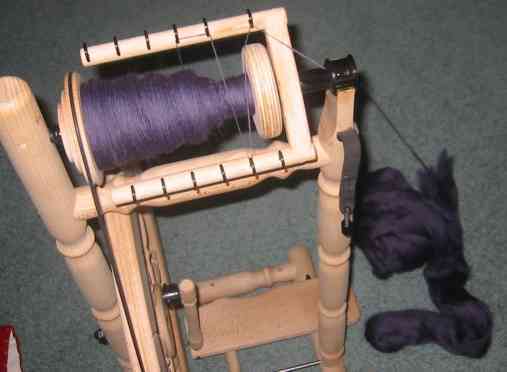 I don’t know whether it’s obvious from the picture, but I’m probably about 2/3rds through this color already.

Sometimes when I sit down at the wheel, the fiber just seems to fly onto the bobbin effortlessly. This was one of those weekends.

Readers’ Comments/Questions
Carol S. asks: “Instead of abandoning the project, would it be possible to find another ball or two of the Ull?”

I considered this, but the dyelot in Dale yarns can vary quite a bit, and since the mother of the child-to-be is an artist, any change in color wouldn’t go unnoticed.

Mindy asks: “Would you be comfy letting the pattern be vertical?

Jo mentions: “You may be able to find a co-ordinating colour and put a wide band of it in the centre. (maybe white or ivory?)”

I considered this as well. I even considered two or three contrasting colors so it wasn’t so obvious that I ran out of the primary color. I just don’t think I’d like the effect of three or five colored stripes in the center of the blanket.

And just so you know, Nutella is available here in the states. Not everywhere, but it can be found. Whereas I’ve never been able to find Kraft Peanut Butter in the states.