Regular readers know how open I am to feedback, and in fact, encourage it, even if it might be considered negative or even mean-spirited.

Open-Minded
I consider openness to feedback to be a sign of open-mindedness as well as confidence and self-assurance. I also consider it a sign of someone who is willing to grow and learn.

This philosophy and personal preference extends to knitting magazines.

I think there are some magazines that are renowned for, at best, ignoring feedback, and at worst, getting defensive and nasty in public debate about feedback.

Whereas, other magazines have at least an appearance of openness to hearing their readers’ feedback.

Spring/Summer Interweave Knits Magazine
On a positive note, I consider IK to be one of the more open-to-reader-opinions of all the knitting magazines. They seem to actively solicit response from their readers, and I value that.

They even provide a couple of different e-mail addresses in their magazine and on their web site to readily send them compliments or critiques.

On a less-than-positive note, I think this most recent issue requires more feedback than any other issue I’ve seen. 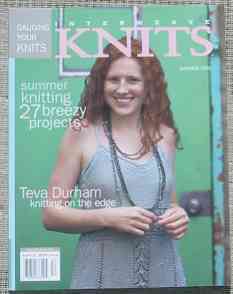 Overall, the magazine has around 18 patterns and sells for US$6.99. If you remove some of the “accessory” designs the total number of real designs goes down to 12.

While I’m not usually a fan of Spring/Summer issues, I’m even more disappointed with IK for this issue. It appears as if they scoured the wastebasket for ideas that had been discarded previously and took bad pictures of them to boot.

Before I go through the design run-down, I will say the articles I found interesting and actually read through many of them.

One-Button Cardigan – Mari Lynn PatricK – It’s very sad when this is one of my favorites of the issue (I hate the front, but like the back).
Isis Wrap – Kathleen Power Johnson – I’d have rather seen a toilet paper cozy.
Summer Sundress – Mari Lynn Patrick – Unbelievable that this awful garment would make the cover.
Bed and Bath Duo – Micki Hair – I liked the pajamas a lot, but not the robe.
Two-Tie Striped Cardigan – Susan Mills – I liked this.
Viennese Shrug – Lisa Daehlin – If you like shrugs, this is a nice one.
Padded Footlets – Mary Snyder – Nice design and colors.
Four Gifts – Various – Stupid except for the Triada scarf which was okay.
Acorn Camisone – Shirley Paden – Lazy effort
Fiery Bolero – Debbie Bliss – One of the worst things I’ve ever seen her design
Premier Pullover – Fiona Ellis – Decent desgin
Buffalo Girl Neck and Wrist Warmers – Therese Chynoweth – Huh?
Lace Leaf Pullover – Teva Durham – What a mess
Fan Clutch and Fun Fur Collar – Lisa Daehlin and Katy Ryan – This has to be a joke
Sleek Ribs Tank – Therese Chynoweth – No comment
Dylan Goes Electric – Karen Baumer – Not awful, but I would never make it
Shoulder Shrugs – Another Knits Staff – Enough with the fucking shrugs already.
Go With the Flow Socks – Evenlyn A. Clark – Very nice design, even the color is good
Assorted Baby Gifts – Various – Bad sweater, decent booties, stupid mini-bears and a nice sachet heart (baby gift?)

I didn’t, but if housing goes up much higher around where I live, the bubble-burst is going to seem like an atomic explosion.

Debbie says/asks: “Joe, I guessed about the Beaudelaire scarf stitch yesterday and have had no feedback. On other blogs I would have had great gifts including stitch holders and hand spun rat fur. What gives?”

I’m not sure what you call Shaker Rib, but it’s not exactly that, although similar.
Elsewise, you would have been showered with all sorts of cat-hair infested novelty yarn garbage.

Carol S. asks: “Hey, what gives with the fancy black box around the photos? Much thicker than before.”

Carol has always had a keen eye. I just found out accidentally how to do this, and I liked it, so I’ll continue with this format until I get tired of it.