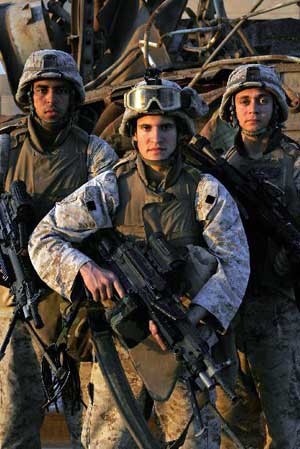 The Latest Insanity
Check out this story about an honorable soldier who is currently serving as an openly gay man in Iraq.

He’s about to be discharged, but not because of his sexual orientation. Since his discharge was imminent, he decided to come out. He has served two tours of duty in Iraq, and is an 11-year Army veteran. He has received six Army commendation medals, three Army achievement medals, a Global War on Terrorism service medal and expeditionary medal and two National Defense service medals. And his unit knows he’s gay, and it hasn’t affected their morale.

The ridiculous part of this story is that even though he’d be glad to stay on in the military, he won’t be allowed because of his sexuality.

What’s wrong with this picture? I thought the military was hard up for recruits? I guess not that hard up.

New Project
I finished the bottom ribbing and about an inch of the body of the new Wool Hemp sweater.

Since I had decided to do a 6X2 broken rib for the body of the sweater, I figured a 2X2 broken rib would look nice at the bottom, and would transition smoothly to the body.

Readers’ Comments/Questions
Mary F. asks “Okay you mentioned a new wheel. Confess what are you thinking about purchasing and has the loom been set aside for the future?”

I mentioned it a while back when I got back from Rhinebeck last year. I put a down-payment on a Robin Spinning Wheel, which is slated to be ready for delivery sometime around April, 2006.

Recently, Koigu had a gorgeous looking pair of pants in one of the magazines. But I still wouldn’t even consider it because of the sag factor.