Now You Know How I Feel

As conservatives join the chorus of anger about how the federal administration has drained resources from important federal organizations like FEMA, all I can say is that there are many who have been warning about his for years.

Katrina
Hurricane Katrina has been an awful disaster in this country, and could have been handled in such a way that our citizens would have been proud. Much like the patriotism folks were filled with after September 11th.

But instead, it’s’ been a disgraceful demonstration of underfunding important projects that keep our citizens safe, so that our president can boast about tax cuts.

Well, at least Mr. Bush won’t have to worry about Cindy Sheehan for a while.

Current Knitting
I’m keeping busy trying not to watch coverage of Louisiana and Mississippi, and I’ve been knitting quite a lot.

I visited my mother this past weekend and got to see the last Vineyard throw I made, and I was reminded again why I wanted one of these for my own.

Current Quilting
As Liza mentioned, I continue to add on to the quilt and it continues to grow.. 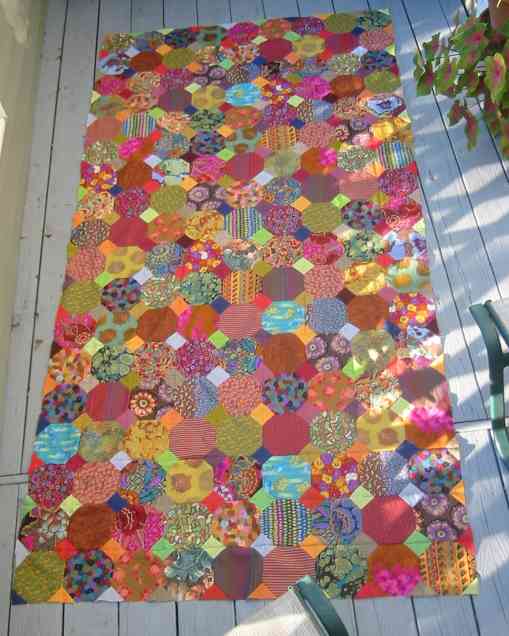 At this point, the patchwork portion of the quilt is as long as it will get (92 inches). So far, it’s 46 inches wide, and it will need to be about 80 inches, so I still have quite a bit of work to do on this.

My oldest sister, is someone who has sewn all her adult life, and she’s very talented with a sewing machine. Like my knitting, she has always picked extremely difficult projects for her sewing. Early on, it was out of ignorance, and when she didn’t know that something was hard, she just worked on it till it was right, and then would find out after the fact what a challenging project she had taken on.

I have a newfound appreciation for her sewing work now that I’m doing a very simplistic sewing project like the quilt.

Readers’ Comments/Questions
Kateri asks, “Why not save hundreds of $ and quilt it yourself?”

If I were going to do the quilting part myself, I probably wouldn’t use a sewing machine, I’d buy a small frame and hand-quilt it. But I have to say, I’m no where near that ambitious with my quilting desires. Like many quilters, I enjoyed patching together the top, but I really have no time or desire to devote to such a time-consuming project.