As the nights start to get cooler, I’m enjoying the soft warmth of my current knitting project laying on my lap.

Go Knit Something
Carol S. is right (as usual), the sweaters on the current issue of Knitty are quite good. I don’t even mind the fanny pack. Not because I would ever make it or wear it, but because I thought the colors were quite fine.

I’m realizing as the weather moves more and more toward autumn, that my fingers itch to pick up a sweater project. The idea of spinning becomes even more appealing and the thought of a quilt on my bed sounds comforting. 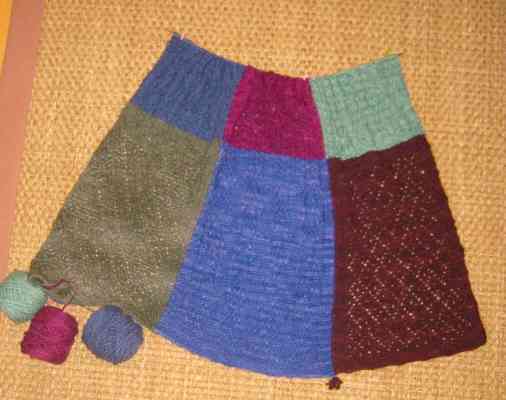 Despite how much I hate the Winter season, I can actually picture myself wrapped in the final blanket, with a cappuccino in one hand, and a book in the other. At least I have something to look forward to in the awful season.

Quilting
I don’t have an update on my new quilt, but I did get my own personal copy of Kaffe’s Museum Quilts.

It seems Gage has decided to become the unofficial spokes-cat for this latest book. Gage has always had better taste than I do. 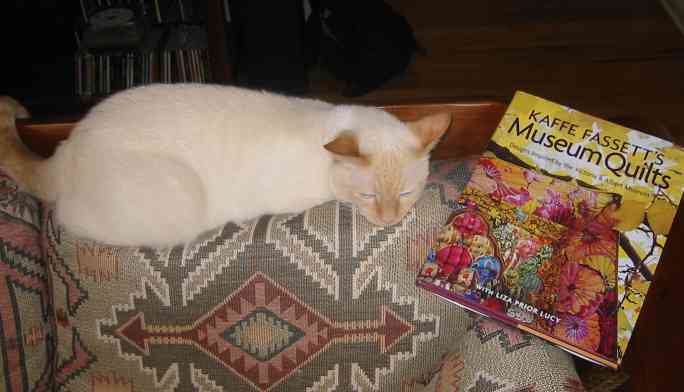 Readers’ Comments/Questions
Marilyn adds, “I think buying books is almost worse for me than yarn. Is that true for you, J? You seem to read as much as I do.

Not really. I don’t read as much as I would like to, and now that I have my own personal shopper at Barnes & Noble, I let him pick out my reading material. So far he’s done an excellent job, except for one bad pick. After I yelled at him for the bad pick, he’s being much more careful to only pick out excellent material, so I don’t end up buying tons of books.

When I stop traveling for a living, both the book store and the library will become very familiar haunts for me.