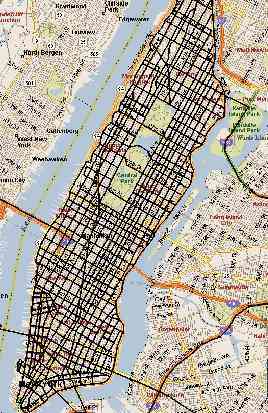 Has it occurred to others that the resemblance is uncanny?

Maybe It’s Just Me
Some might say I’m obsessed, but I think the Island of Manhattan is very flaccidly phallic. Others might consider it very Freudian (I mean, what’s up with a city that has two tunnels to get there?).

Come to think of it, Lisa lives right near the foreskin…can you say “smegma?”

Knitting Progress
Coming back to a sweater after I just abandoned it months ago is proving to be a little more difficult than I anticipated. 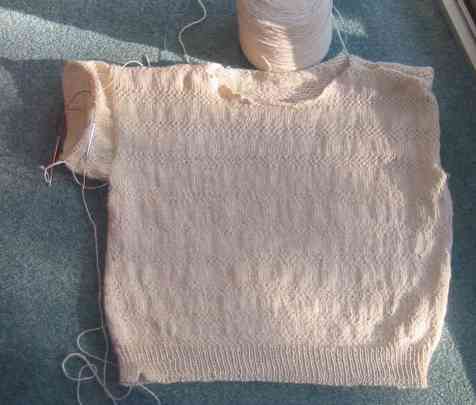 While it doesn’t look like I’ve done much of anything, you’ll be surprised to know that I’ve actually undone and reknit that sleeve portion twice now.

You can’t see it in pictures, but I’ve put a very subtle pattern stitch into this sweater. The basic pattern is 8 rows of stockinette and then the following sequence:

Repeating these two rows for a total of 10 rows.

The overall appearance is of white-on-white textured striping throughout the garment.

This is the pattern stitch that I couldn’t remember what I had done, so I had to unknit and reknit a few times to figure it out and make it look consistent with the rest of the sweater.

Weekend Plans
Since Quilt Guru, Liza is having a bulldozer drive through her kitchen, Thaddeus and I will actually be hosting Liza, her husband and Mr. Fassett at our house for dessert on Saturday, at which point I will get to show him my quilt made with his amazing fabrics.

Despite Kaffe’s supposed penchant for it, there will be no swooning, unless Liza’s husband, Drew is so inclined. Knowing Drew just a little, I tend to doubt swooning will occur.

Other Quilting News
I do intend on trying my hand at another quilt. I’ve been looking through a few books I own for design ideas that will best utilize Kaffe’s fabrics, and I think I’ve found my next idea.

As soon as the new Kaffe fabrics are available (which I think is soon), I will be starting a new design.

It will definitely not go as quickly as the first quilt top.

As some of you might remember, I ordered a Robin spinning wheel last year at Rhinebeck. The waiting list at the time was 18 months, so I’m hopeful that I can get a status on the wheel next weekend at Rhinebeck.

Spinning maiden, May asks, “Along the way did you learn to gently ‘pet the kitty’ to see which direction the roving would draft easier.”

Yes, this technique is strongly recommended by the only instructor I’ve had formal workshops with, Nelda Davis. When I first started having difficulties with one particular color, I checked to see if I hadn’t mis-petted the kitty, and tried spinning from the other end. It was only worse.

Big Alice writes, “Just so you know, though, Hobbs Heirloom is a 80% cotton/20% polyester blend, unless they’ve suddenly changed their formula. I do like using the stuff but it’s not completely cotton.”

First someone tells me that my Lambs Pride isn’t all wool, and now this? My life is crumbling before my very eyes. Of course, Alice is correct, it is a blend, and I just assumed since it says “COTTON” in big bold letters on the front, that it was…well, cotton and not cotton blend. Unless Liza mandates otherwise, I will probably just use it anyway.