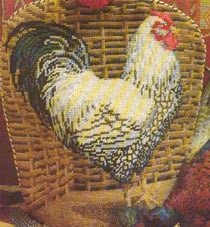 As many of you surmised, I was talking about poultry, not pornography.

Tea Cozy or Willie Warmer?
During Kaffe’s needlepointing days, he designed this spectacular needlepoint tea cozy and tells a funny story about it. Since it’s his story, I’ll let him tell it as appropriate.

Knitting Progress
With all the excitement this past weekend, I did a total of two rows on the wool/hemp sweater sleeve. 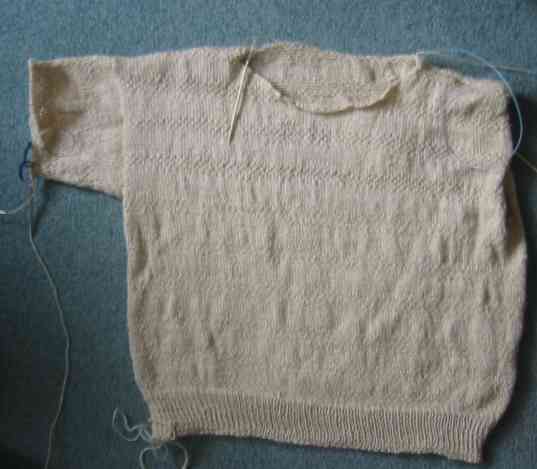 Suffice it to say, I need to put some effort into this project during the week.

Other Knitting
I made a bonehead move with the Vineyard Throw border.

I was asked if I was going to pick up stitches and knit the border, or knit it separately and then sew it on.

As stated earlier, I picked up 160 stitches and started the Tulip Bud border from A Second Treasury of Knitting Patterns by Barbara Walker. It’s an 18 row repeat that had me up to 400 stitches, when I realized this stitch pattern isn’t knit horizontally, but vertically.

I ripped it all out and then started making the border separately, as it was supposed to be knit.

I’m liking how it looks, but I wish I were further ahead on finishing this project.

Readers’ Comments/Questions
Julie says, “Tell Thaddeus we found giant puffballs a few weeks ago – right in the middle of Minneapolis. Looked outrageous, tasted not that interesting.”

Edible puffballs don’t have a lot of taste, although Thaddeus made a Puffball Parmesan dish once that was very good (made exactly like Eggplant Parmesan, except with thickly sliced puffball).

Kateri asks the age old question, “How do you pronounce Mr. Fassett’s first name? Long A? Short A? Silent E?”

Susan is correct, in that it rhymes with “Safe Asset.” And in case you care, Brandon Mably rhymes with “standin’ abley” (sorry, that’s the best I could come up with).

Emma states, “I have a Kaffe-related question – an article about Brandon Mably in one of the UK magazines were quite coy in the way they referred to him as Kaffe’s partner – I assumed that they meant life partner as well as business is that correct?”

I do know they are business partners, but as far as life partners, I honestly don’t know. I can only hope that they play for our team, because they’re both amazing guys.

Cynthia and others mentioned the decision to not critique knitting magazines anymore.

The truth of the matter is that my opinions are no more or less valid than anyone else that gets to see the magazines. It’s just like movie and restaurant recommendations, it all depends on whether you agree with the reviewer.