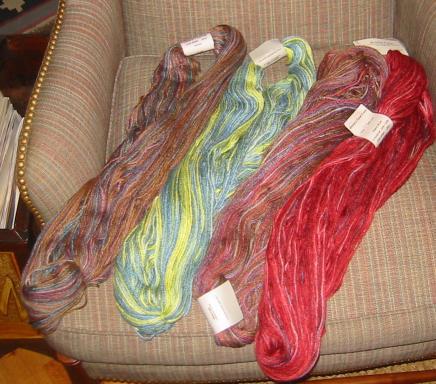 Today’s entry is to chat a little bit about the purchases I made whilst at Rhinebeck.

Fiber Haul
I noted in yesterday’s entry that I bought quite a bit of stuff in my first half hour at the festival. Fortunately, I wasn’t as enamored with most of the other vendors, and my spending slowed considerably. Especially fortunate since I didn’t know I’d have to pay for my Robin spinning wheel until toward the end of my time at the fairgrounds.

The first booth to catch my eye in a big way was Brooks Farms. There yarns had rich, vibrant colorways, and they had racks and racks of lovely skeins.

These four skeins will be made into multi-colored scarfs that I will give as gifts.

Then I left my shopping buddies and headed over to Indigo Moon Farm’s booth. I don’t know what they do to their fibers, but the wool roving I bought from them is glorious in both color and feel. The soft, silkiness is unbelievably enjoyable to play with. 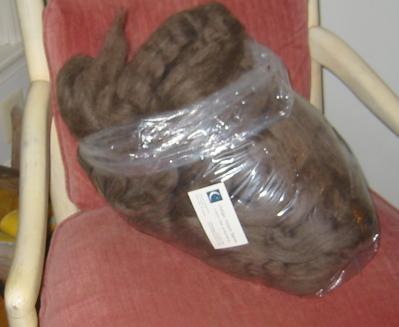 The roving is quite tan looking, but since I needed something to spin on my new Robin wheel, I’ve found that this spins up to a fine gray color. (picture in next entry)

The initial destination when I arrived at this first barn/building was Skaska Designs’ booth. Their yarns and shawls premade for sale were truly fine. I picked up a skein of merino laceweight to make a to-be-designed lace shawl. 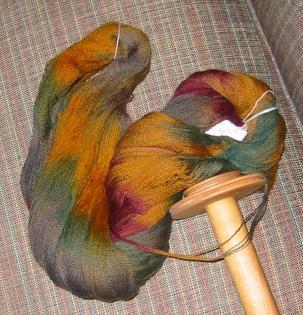 I couldn’t decide on whether to go with a natural color yarn or one of the spectacular colorways. This colorway won out.

I went through booth after booth after that looking for something as special as my first purchases, and while there was lots to tempt me, nothing got me to take my wallet out until I came across this lovely colored boucle yarn. 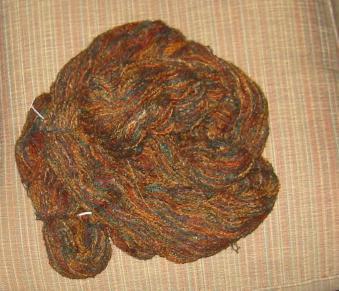 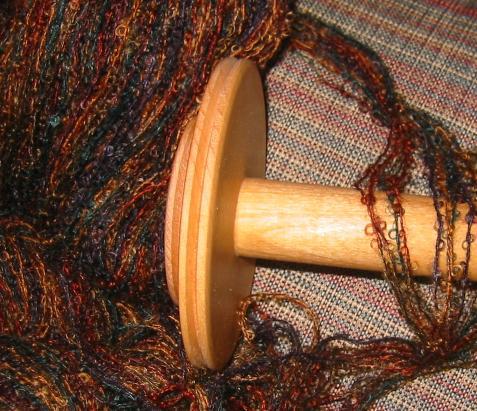 I don’t even know where I bought this yarn, but I thought the color was perfect, and even though it’s mohair boucle, it was fine enough that I thought it would make an interesting man’s sweater. We’ll have to see.

Next purchase was a diz kit from Woodchuck Products.

This is a random picture of a diz which is kind of like mine, except mine is made of a lighter wood and has multiple sized holes (other than that, they’re exactly the same). It’s used to create long strands of roving after the fiber has been carded or combed.

Finally, I had searched the entire vendor market for a niddy noddy, and ended up going back to the first one I found at Bay Colony Farms. I got to meet Helen, who is a friend of Harry, the guy who lives on the gay mountain retreat with my friend Stephen. Clear as mud?

I don’t have a picture, but it’s simple and matches my new wheel very well.

Designer Appearance
I’m bummed that I can’t attend, but I though others might want to know.

One of my favorite designers lately, Lucy Neatby, will be having two workshops at Rosie’s Yarn Cellar in Philadelphia on Wednesday, 11/16 and Thursday 11/17. I’m not sure if there’s even any space left in the workshops, but thought some local readers might be interested.

Current Knitting
I don’t have any pictures of the sweater or the Vineyard Throw edging, but I’ve made progress on both.

The natural colored wool/hemp sweater has a sleeve that almost completed down to the cuff. I’m hopeful to at least finish the sleeve before I get home this Friday.

I also did a number of additional “tulip blooms” for the edging of the Vineyard Throw this past weekend. I think it requires fifteen repeats of the pattern stitch and I have ten done. I should easily finish that this weekend and sew it up.

Readers’ Comments/Questions
Carol S. asks, “The only picture you had of me was that one? Oh God, you DO hate me?

Yes and no. That was, in fact, the only picture I had of you, and I figured it was better than leaving you out. By far, that was the most hateful picture I posted. Kathy and Lisa have absolutely NO claims for most hated based on picture ugliness. Sorry.

Concerning my new Robin spinning wheel, Alison claims, “That’s a Schacht dressed up in a tux.”

I was fortunate enough to try out Marilyn’s Schact wheel once, and it is a lovely wheel and spins like a dream. But trust me, saying that a Robin Wheel is like a Schacht in a tux, is like saying dressing me in a tux makes me as good looking as Jake Gyllenhaal.

Valerie asks, “Did you learn on a drop spindle first? I’m finding it very difficult, but I really WANT a wheel in a bad way after Rhinebeck.”

I did learn on a very rudimentary drop spindle first, and I was very grateful for having learned drafting on it. The drop spindle is unforgiving as a teacher, and I would highly recommend trying to perfect your drafting with that first. Using a drop spindle also made me extremely aware that a spinning wheel would be much more efficient at spinning fiber once I knew the basics. I completely agree with JoVE that you should borrow a friend’s wheel or see if you can borrow one before buying or join a spinning guild where someone could let you use theirs.

Rachel and Corvus both mentioned that I’d make a great teacher (regarding showing Franklin some spinning stuff).

I laugh when I read/hear this kind of comments, as I hate teaching, especially something that comes somewhat naturally to me. It takes every bit of patience I can muster not to grab a drop spindle from a newbie and just do it myself. But thank you both, it was a pleasure meeting you and I can’t tell you how enjoyable it was to watch Franklin play with his new toy.