I have received nominations from about fifty people so far, and already some categories have exceeded the limit of ten nominations. So, the number of nominations for a blog will make a difference as to whether you will get to vote for the blog.

Knit Blog Award Clarifications
Some questions have come up with regard to the rules.

Ted asks, “I have blogs I’d like to nominate for several categories, but I’m puzzled as to why “number of other sites that link to the newcomer’s blog” is listed as criteria for any of the catagories other than the newcomers blog. Is that specification is a copy/paste error in these other categories?”

Cynthia asks, “Are you exempt?”

Not that I would expect to win anything anyway, but I won’t accept a nomination for an award since I’m doing most of the administration of the awards, and didn’t think it was fair to include myself.

Cindy and La ask “Did you ever see this site: http://knottygirls.com/jenlablog…index.php? p=175. It might give you some ideas?”

I wish I had been able to find these awards from last year in a Google search before I started this effort. Their categories are very funny.

Marcia asks, “The “Quality of Comments” criteria is a bit confusing. Are you saying blogs will be partially judged on the overall, sheer genius or fucktardedness their commenters? If so, how does one measure that?

One way I evaluate a knitting blog is by the folks that participate in the comments forum for that blog. So, for instance, if I believe the commenters add to the interest of a blog, I am more likely to read that blog.

Jay notes, “It’ll be a good launching pad for blogs that people aren’t familiar with though!”

I totally agree with this comment. The most commonly nominated blog is one that I had never even heard of until now.

Current Knitting
I did finish the knitting and the grafting of the body on the wool/hemp sweater. 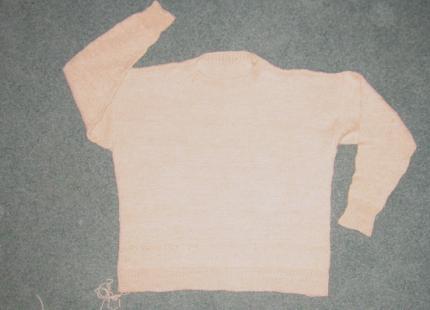 I know the picture sucks, but even if it was clear as a bell, you still wouldn’t be able to see where I grafted it together.

Who is this Kitchener and how did s/he come up with such a great technique?

I still have to lengthen the sleeves a little.