Back to Knit Blogging

While you can continue to vote for your favorite Knitting Blogs, I will go back to my regularly scheduled menu of knitting and trying my best to foil the efforts of the evil neo-cons.

Gifts From The Kiwi
James, the knitblogger extraorinaire of New Zealand sent me a gift, that I dutifully waited until Christmas day to open. 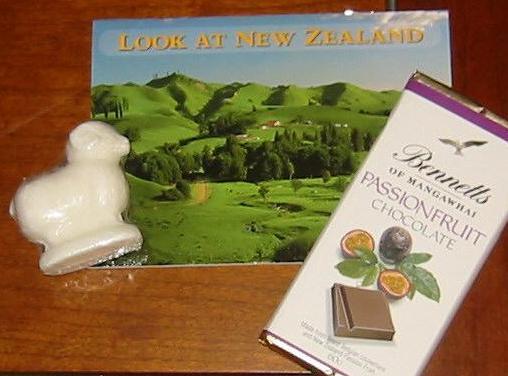 What could be better than sheep soap, a New Zealand picture planner and chocolate all wrapped in handknitted wrapping paper? I must admit that the chocolate is already gone (the chocolate was Belgian and the passion fruit was from Kiwi-land) and it was spectacular. Milk chocolate (my favorite) and smooth as silk. Thank you James, you’re the best.

Current Knitting
I had off the week between Christmas and New Year, so I took it as an opportunity to finish up loose ends. In addition to completing the lengthening of the wool/hemp sweater (body and sleeves both done and grafted and all ends woven in), I also finally sent off the quilt to be finished. I’m hoping to hear from the finisher some time this week to see how she wants to quilt it. My idiot-knitting took the form of the kid alpaca bedspread/grave blanket.

I also decided to use up the remainder of the Brooks Farms yarn for two additional scarves. 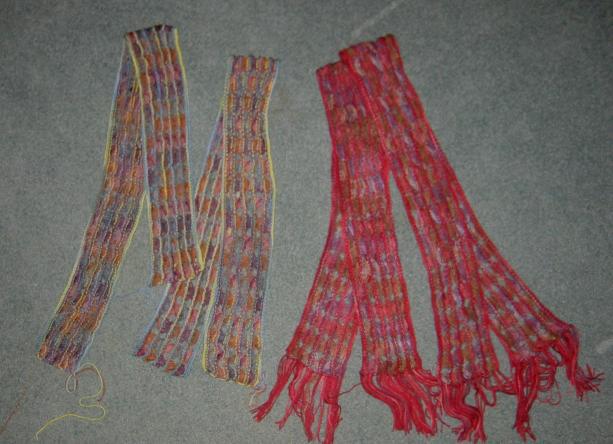 Using a modification of the Koigu Cross Stitch scarf pattern, I was able to get two 5 or 6 foot long scarves for each skein of Four Play yarn. At $16 per skein ($8 per scarf), I think that’s a great deal, especially when you consider most of the novelty yarn scarves I make cost between $8 and $12 per scarf, and they’re no where near as soft and nice looking as these.

Speaking of which, Carol has a great moot court argument on the cost factors of acrylic vs. natural fiber argument. As always, her argument is very compelling.

Readers’ Comments/Questions
There has been a lot of nattering about the fairness of the Knit Blog Awards. I can only say that this year’s awards were a good experiment in pulling together something as big as the awards have already become. I’m glad I had off a bit of time over the holidays to be able to administer it all.

Next year will be a different format. I liked the nomination process this year, so I will probably keep that the same, but the awards will be granted based on a vote by a committee, who will be selected based on their ability to evaluate the nominated blogs on the specific criteria of each category. Now I just have to figure out how to select the committee.

To those of you who recognized the value of the Knit Blog Awards, thank you. I too was glad to get to see some blogs I had never heard of, some of which I will need to consider posting to my outbound links.