Say Goodbye To Judicial Balance
With the impending appointment of Alito to the U.S. Supreme Court, it seems evident that judgements like the Oregon suicide ruling will be a thing of the past.

The U.S. Supreme Court ruled on Tuesday that states have the authority to regulate medical treatment of the terminally ill, making a case of assisted suicide in Oregon a huge precedent for folks who care about the dignity of this country’s terminally ill.

The best part is that the ruling was considered a “fuck-you” to the Bush administration, specifically former Attorney General John Ashcroft. The court said they improperly threatened to use a federal drug law against Oregon doctors who prescribe lethal doses of medicine to dying patients who request it.

Despite Alito’s promises to have no personal agendas, I can’t help but think he will be a pawn of the assholes like Ashcroft, who feel they can bully anyone.

It was good to see that Justice O’Connor could at least keep the bullies in check.

Current Knitting
The Accidental Shawl is continuing, and I find that the pattern stitch is easy, and yet looks great. 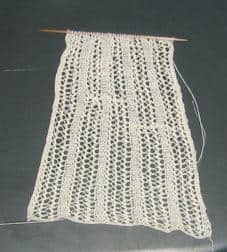 To give you a sense of the scale of this garment, the needle in this picture is five inches long.

I’m thinking that this portion of the shawl will block out to about ten to twelve inches wide, and that the border will have to make up the difference to make it a full-width shawl.

Quilting Update
I’ve been working with a finisher in Northeast Pennsylvania on how she will finish my quilt top. She’s already basted the quilt, and picked out the thread, although she is finishing up another quilt, so the work on my quilt will be delayed a little.

She sent me pictures of her work, and it only made me more excited about getting my quilt finished.

Readers’ Comments/Questions
Regarding my quilted pillows project, Michelene asks, “(I)f you use these pieces as minis, and quilt them to a backing, why would you then want to attach them to a different backing in order to make a pillow?”

I think Jo answered this question in her comment accurately. I really want pillows, but I want to have the front of the pillows be quilted, so I’ll need to have two backings. The quilt backing can be any old boring fabric, since it will be inside the pillow. The pillow backing will need to be more interesting since it will show when I throw it at Thaddeus or Gage.

Also, thanks to everyone who commented on yarn substitutions. What a great knowledge-base this group has.