Despite a wave of harsh criticism, the major knitting magazines seem to only get worse and worse.

Is The World Crazy?
Carol displayed a rejection letter she got from Interweave Knits magazine for one of her designs on her blog the other day. Knowing Carol personally, and haven seen a lot of her designs, I can’t imagine it was worse than the shit they’ve been publishing.

I could possibly understand that her submission didn’t match the “theme” of whatever magazine is in progress right now, but I have to believe they could have fit it in somehow.

Maybe it’s just my personal friendship with Carol that makes this hard to believe, but I think it’s more than that. From what I’ve seen published in the knit mags lately, I would think they’d be begging designers for interesting designs.

Cast-On Magazine
Speaking of which, I just picked up the latest copy of Cast-On magazine. About 19 designs for $5.95, as well as a beginner’s article on gauge and a more advance article on twisted stitches and cables. 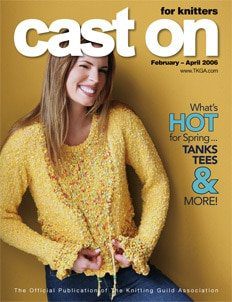 There is only one design that is worth mentioning, and it’s a knit and crochet top by Carole Powell called Blush Knitted/Crocheted Top. It’s very delicate, has some decent shaping and looks very nice. From a practical perspective, it is lacy and see-through, but still very appealing.

Most of the remaining designs are dreadful, with a few plain boring designs thrown in. Designer Rebecca Sweinhagen has the least offensive and the most offensive designs in the magazine.

Readers’ Comments/Questions
Concerning quilting pains, Linda suggests, “One or two of the fingers cut off a household rubber glove should fit a thumb snugly and last way longer than a finger cot. (The index and ring fingers work for me.)’

I like this idea. Thaddeus has a box of gloves that are not quite as thick as Playtex gloves, but should be perfect for this use. And I figure I can get 5 pairs of fingers from one pair of gloves…how perfect.