I saw an interview with Sarah Vowell who was promoting her new book and she mocked herself by saying how much she cried when Bush was being sworn in the first time, and how concerned she was that he might ruin the environment or reduce civil rights.

Beyond All Repair
For those of you who don’t listen to National Public Radio, Sarah Vowell sometimes narrates stories on a show called “This American Life” and is very funny. She has a very distinctive voice which is both understated and hilariously funny at the same time.

Her woefully inadequate worries at the signing in of this incredibly inept president made me both laugh and cry.

I remember being amazed that Bill Clinton was able to come in and correct many of the dreadful mistakes that were made by both Reagan and Bush I. But I fear the devestation wrought by Bush II and his cronies will never be able to be corrected.

I think of the impending civil war in Iraq right now that the U.S. is largely responsible for. I think of the fact that Hugo Chavez and his Venezuelan oil are the only folks that would offer to sell our poor cheaper heating oil this Winter season. It will take 10 Bill Clintons to clean up this mess.

Yes, beyond all repair, I fear.

Current Knitting
I’ve continued on with the lace knitting, although, you’ll see below that I’ve been focusing on other fiber-related activity as well.

Other Fiber-Related Activity
Spinning continues to go about as planned. By the time I head back to work early Monday morning, I will have finished the second bobbin of Blueface Leicester singles and I will have made some progress on the third. 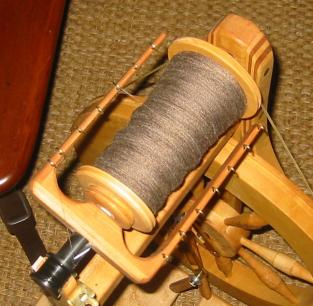 I also finally got the quilting supplies I ordered last week, and restarted quilting the pillow. 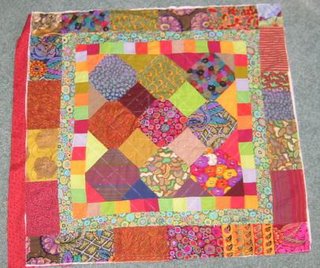 I’ve basted together my first “sandwich”, and I’ve marked most of my quilting lines. I’ve done the majority of the center of the pillow and it’s going very well.

First of all, the batting is making a significant difference, and it is MUCHeasier to quilt.

Finally, starting in the center and working outward is a lot easier as well.

While my middle finger hurts again, I’m already re-forming a callous, and quilting is getting pretty routine and easy.

Readers’ Comments/Questions
Yesterday’s comments on the management of the ports were some of the most thoughtful, interesting opinions I’ve read in a long time. Readers added a significant amount of both information and perspective. Thank you all.

Concerning the Accidental Shawl, Jay notes, “Mother of God that is fine and fiddly work… beautiful, but I bet a lot of headache tabs went into the making of that!”

Actually, the pattern stitch is easy and automatic, and this project has been one of the easiest and headacheless projects I’ve ever designed. It’s actually not even that fiddly, it’s quite easy and seems to grow much more quickly than other lace projects.