I have often mentioned that I plan on retiring in 7 years (I’ll be 54), but I’ve never really described what retirement means to me.

Fredda’s Comments
Fredda (of Knitting Vault fame) in her comments yesterday, made me realize that I had never really described what I meant by retirement.

One of my brothers has been extremely successful in business, and most likely could have retired years ago (he’s under 50 years old). I think he even tried retirement for a while, but realized that few of his friends could join him for a mid-week golf game or stay up all night in the middle of the week playing poker, and that most of his socializing came through his work life. He quickly went back to working.

For me, retirement means not having to work for a living.

I like the work I do, but there are times, like with any job, where it can be very stressful and trying. When I leave this career, it doesn’t mean I will never work again. I most likely will, although it won’t be a financial requirement that I work. That way, anything I decide to do for pay, will also be something I enjoy. Most probably, it will be fiber-related in some way.

Current Knitting
I completed a total of one more round on the Accidental Shawl.

Not exactly the power-knitting I was hoping to get done, but I fit it in where I can.

Quilting Progress
I know it’s difficult to see quilting progress, so I’ve digitally accentuated the quilting that I’ve done so far to try and make it a little more obvious. 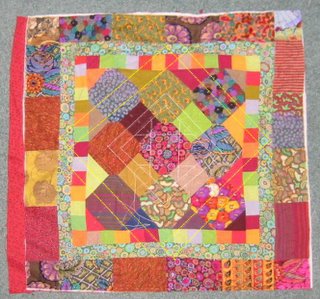 I may need to get better at digitally enhancing if I want to show any progress at all.

Readers’ Comments/Questions
Regarding a knitting/reading related gift for a knitting friend, Cynthia asks, “Any suggestions?”

I don’t really have any suggestions for literature with knitting content, although I was glad other readers came up with suggestions. Personally, I would try to start her on a new addiction and give her a beautiful wood drop spindle and some roving, with a beginner spinning book.

Regarding my dislike of James Frey’s use of gay-baiting his readership, MOG writes, “And I interpreted the priest incident, not as a gratuitous ‘See I hate gays, too’ interlude, but more a ‘See how awful I was before I came into the light. How can anyone forgive me?'”

I couldn’t disagree more. I don’t even believe the incident occurred at all as he described it. I have known a lot of lecherous gay men, but none so bold as to continue to be physically insistent at the risk of violence. That priest would have given up after the first attempt. I truly believe the entire story was a slimey plot device that the author made up.