The word ‘compromise’ can have such negative connotations, but I find it’s a necessary component of day-to-day life.

Viewpoint
I guess it’s all in the perspective of how something is viewed as to whether compromising is a good thing or a bad thing.

This past weekend, we saw the movie “Transamerica”, and I was highly impressed with the movie, and I’m very glad for having gotten to see it. I have nothing but high praise for both the writer/director Duncan Tucker as well as Eve Battaglia, who cast the movie.

One complaint that I’ve heard about the movie, is that Felicity Huffman (who plays a transexual in the movie) should have been played by a real transexual.

On the other hand, Ms. Huffman did an admirable job playing a transexual (I personally think she should have won out over Reese Witherspoon for best actress), and her name recognition brought this movie to a much wider audience than it would have without her. Allowing middle-America to see some of the issues faced by the transgendered in this country was an important part of this movie for me, and having someone with prime time credibility helped get those messages across. It was handled in a very sympathetic way, but wasn’t all Ron Howard-ized.

Did they compromise the integrity of the movie by having a GG (genuine girl) play the transexual part? Was it worth the compromise?

Current Knitting
I’m getting worse and worse at estimating how long a knitting project will take me. I worked like a dog on the Accidental Shawl this weekend, and I’ve got three and a half inches of the border complete (perhaps four, depending on blocking), but that still leaves at least another inch to knit. 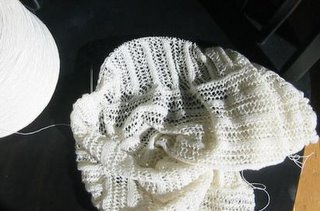 With hopes of finishing this project this week, I brought some additional yarn with me to Albany to start the design of my next project. 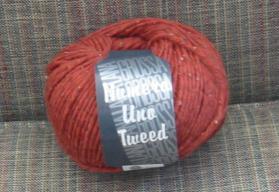 This is Numero Uno Tweed yarn by Lana Grossa in a nice muted orange tweed. I’ll try swatching this in a few ways and see how I like it in various stitch patterns.

Readers’ Comment/Questions
I know some of you don’t go to prior entries and read comments, but Mhairi had a comment that I thought was important to respond to. Mhairi writes, “I looked at your picture – I read that you would be 54 yrs in 7yrs time.
I checked the picture again!
Either the picture has been around for some time, or I need to get me some of the face cream you use!”

Thanks Mhairi, I work very hard at keeping my youthful looks. I am about to turn 47 and while that picture is probably about one or two years old, I don’t look significantly different. If anyone is interested in my skincare regimen, I only wash my face with water (never soap) and I use a combination of two Clinique products on my face. Turnaround cream each morning after I bathe during the week, and M Lotion on the weekends when I’m home. Both seem to make a difference, even though I have been luck to be blessed with good skin and a decent head of hair that hasn’t grayed too much yet.

Regarding my friend Stephen’s hat that I plan on using the pattern stitch for, Carol S. asks, “Is your friend’s hat commercially knit, or handknit?”

It’s a commercially available hat (I’ll have to find the brand name, he told me, but I forgot), but it may have been hand knit by someone in Indonesia or something.

Iris wrote, “I am very curious about how your brown Blue faced Leister will look plied. I spun some natural white last year, and loved it. It’s going into a sweater, so it will take some time to have a finished piece. I like the luster of this fiber, and the fact that for a longer fiber it is still remarkably soft.”

I’m glad someone else has had a similar experience with this fiber. I am also very curious as to how it will ply up. So much so, that I may decide to only fill up one third of the last bobbin and ply it to see how it comes out before finishing the remaining singles. Somehow, that seems like cheating, and I may decide not to.