I know today’s subject is highly controversial and very emotional for some folks, but I felt it was necessary to express my opinions.

Sexual Chatting With Minors
Dateline has had a three-part (so far, it’s only 3, let’s hope they have no more) series called “To Catch A Predator” where they film adults, posing as teenage boys and girls, chatting with potential sexual predators, and getting them to come over for sex.

When the predator arrives, looking to have sex with a 13 year old boy or girl, a Dateline person interviews them, while they secretly film the interview. Once it’s revealed that the person will be publicly humiliated, the person almost inevitably tries to leave and either does so successfully or is arrested by local authorities.

Please don’t misunderstand, I find child sexual abuse as awful as most of you do, but I also hate how Dateline is conducting themselves.

Here are my concerns:

1. They work with a group called “Perverted-Justice” to help identify and trap predators. This group of vigilantes is known to aggressively search for predators, and pursues them, with constant requests for pictures and offering sex.
2. Perverted Justice’s tactics have virtually no success rate in getting child predators off the street. In fact, they have actually hindered formal investigations and invalidated evidence. They have also ruined lives through their methods of entrapment and lies.
3. Dateline sensationalizes the identification of some seemingly very sick individuals.
4. They almost never mention recovery programs for folks that have sexual addictions that would lead them to this sort of behavior.

If I felt that Dateline was helping to make children safer in any way, I would consider this a valid show, but to me, it’s clear that they’re only looking for viewership, advertisers and dollars.

I find that almost as reprehensible as the child predators they show.

Current Knitting
I made some additional progress on a very slow bind-off process (I’m still less than halfway done binding off). It also looks like I’ll be running out of yarn for this method of long-tail bind off, so I won’t be able to finish until I get home on Thursday night.

Fortunately, I brought the yarn for the new sweater design so I won’t have idle hands.

Other Fiber Related Activities
I continued hand-quilting the first pillow-top. I’ve started the swirls on the outer border, and it’s going pretty quickly, but I still need to decide on what pattern to use on the inside corners of the pillow.

I also got a little more spinning in on the third and final bobbin of Blueface Leicester. 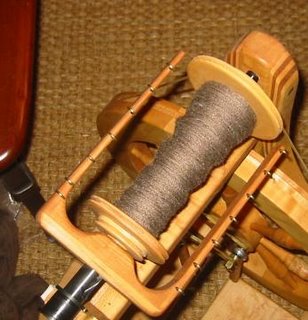 If my occasional “makes” are any indication, this is going to turn out to be some spectacular yarn, and eventually, a spectacular sweater.