…and other thoughts on health care and self care.

My Mother Is a Nurse
You’d think that having a mother who is a Registered Nurse would have meant I would have a stronger understanding of how and when to utilize health care, but I have to say, I’m one of the least able to determine when or if I need to go to a doctor.

Ann Marie’s mother’s voice in comments yesterday made me think about this.

How do you decide when to consult a doctor and when to just let yourself heal naturally?

With regard to my current and mysterious pain in my neck, it seems that I’m just having a normal ache that comes with being a 46 year old man, and that eventually it will go away. And consulting a medical professional seems excessive to me, especially when I avoid medicine unless absolutely necessary (and pain-avoidance isn’t absolutely necessary in my opinion), and the doctor will probably just suggest some analgesic.

But, on the other hand, I one time coughed consistently for over two weeks, until Thaddeus finally ordered me to the doctor, who diagnosed bronchitis and prescribed a couple of things that got rid of the cough almost immediately.

As a final note on this subject, I don’t anticipate whining on this blog about every pain and sickness I have (there are plenty of knit blogs to which I can refer you that fill that need), nor do I look for healthcare advice from virtual knit-pals. I just find the differing philosophies on the use of healthcare very interesting.

Current Knitting
A modest start, but I’ve cast on the new sweater and knit a few rows in the tighter of the two pattern stitches. 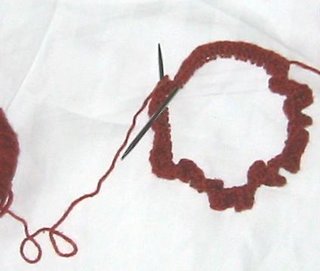 This will probably be the front of the sweater (as I prefer completing the neck shaping first on the front when designing a sweater on the needles), and I don’t plan on doing any ribbing at the bottom (since the pattern stitch is faux ribbing already).

Now I just need a clever name for the new sweater. Any ideas?

I actually own an old version of Sweater Wizard. I was one of the beta testers for the program early on, and I got to work with Carole Wulster on the design of it. She is quite amazing, both from a programming perspective but also with people skills. She actually invited a group of KnitListers to beta test the program, and then dealt with a barrage of criticism, stupid comments and complaints. There was also a little bit of useful testing results in the feedback.

The woman is a saint for how she handled it all