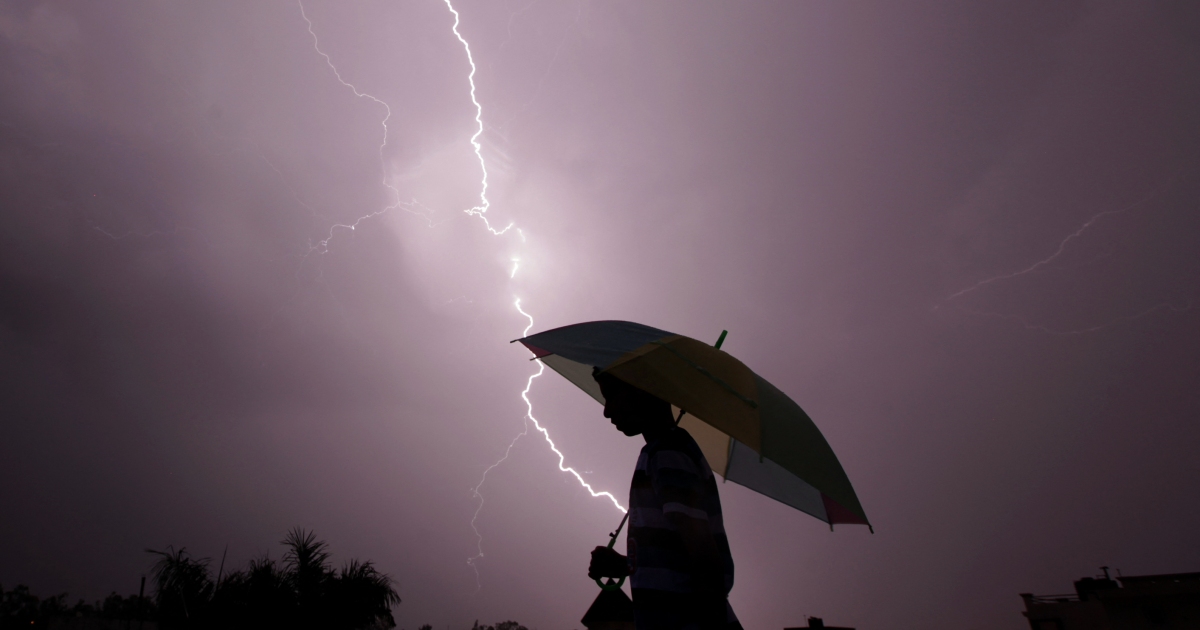 Did I ever mention how much I love lighting?

Strikes Twice
I have seen lightning strike within a fifty feet of me three times in my life, and all three times were amazing and exciting for me.

The first time was when I was a teen, a friend and I were hanging out in his yard as a storm approached. The sky hadn’t been dark for a minute when the ground about fifty feet away from us exploded with lightning, and travelled upwards into the clouds.

The second time, I was driving on a major highway in New Jersey and the sky started turning that deep, menacing purple/yellow bruiselike color. I smelled that freshness in the air that meant that a bolt of lightning was gathering and pulling all the airborne particulates out of the air. A thin, very straight lightning bolt came out of a low hanging cloud and hit the grass in the median about fifty feet in front of my car, throwing a three foot piece of sod about 10 feet into the air.

The last time was by far the most exciting. I was sitting inside a small office building on the first floor, looking out a window onto a little sidewalk and parking lot. There was an overhang, over the sidewalk, but I could still see that the sky was getting ready to to storm. Again, I felt the impending lightning, but this time it was the hair on the back of my neck standing up. I looked outside to see if there was anything metal that would attract the lightning, and I saw a big red fire bell on one of the posts supporting the overhang, just outside my window. Within seconds, lightning hit the bell, and forked out into about ten different little bolts of lightning, one of which hit a woman in the parking lot. She was knocked down, so I ran out to help her. She seemed a little dazed, but fine, and she couldn’t find her car keys. We found them about ten feet to her right, and they were warm to the touch. We assumed the lightning had hit her keys.

I know that some folks hate lightning, but it truly amazes me. The most fascinating aspect of all three of my experiences was the difference in the form of the lightning.

Current Knitting
I got to the end of the first ball of Uno Tweed, and realized that I would be woefully short of yarn for this project. 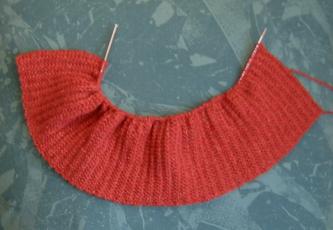 The picture shows about four and a half inches of knitting, and I only have ten balls of the Uno Tweed. I usually buy enough of most yarn to make a man’s large sweater. This purchase was a clearance sale at Simply Knit when they were closing, and I bought all they had.

The name turned out to be “Short Ribs”, but given the lack of length and the disappointment of the project, Franklin’s suggestion of Benoit would be appropriate. I guess I’ll just have to make a bunch of nice hats out of it or something.

Shawl Finishing
I finished binding off the shawl, and did a light ironing, but didn’t do a full blocking yet. 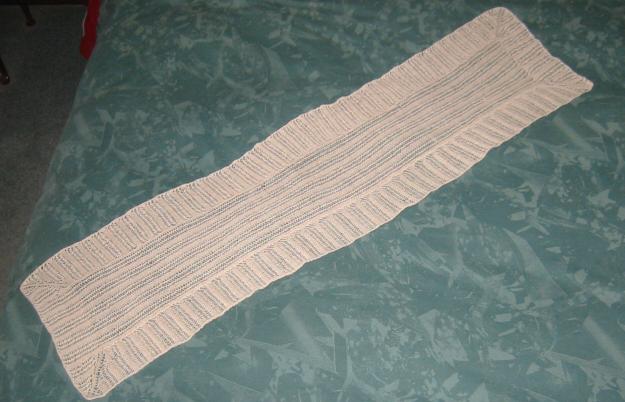 I would have done a few things different, but overall, I’m very pleased with how it turned out. I’ll get a final measurement after I do a full wet-blocking.

Readers’ Comments/Questions
Mhairi asks, “Shawl is looking good – will there be a pattern sale soon?”

I don’t think I’ll sell the pattern, but I will probably post approximate instructions for it. I posted the pattern stitch that I used, and I’ll supplement that with number of stitches I cast-on for the center piece and how many I knitted on for the border. But I don’t want to write up the increases for the mitered corners, and I’d feel obliged to if I sold the pattern.