Had To Have
I don’t knit much with straight needles (I mean, they’re straight afterall), but when I saw these… 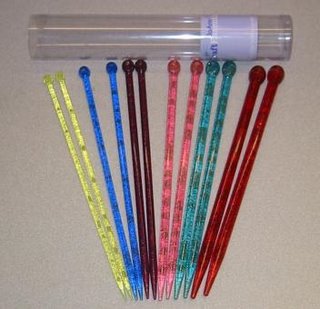 …in JoAnn’s last night, I just had to have them.

They are see-through acrylic with gold sparkles and are in sizes between US8 and US17. They’re practically like the fairy princess’ magic wands fercrhissakes. They will have to come up with a different name for these not-so-straight needles.

I also bought some clearance yarn that was 60% off.

It’s Moda Dea Fresh ribbon made of acrylic and nylon. I don’t know what I’ll do with it, but it was 60% off and it was yarn…no brainer there.

Current Knitting
I finished up the last shaping on the faux rib cap, and while pictures don’t do it justice, it’s a very nice hat. 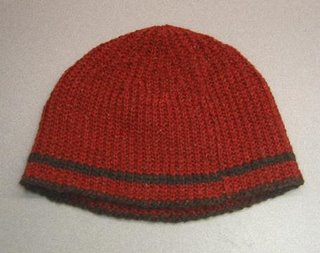 I’ll try to find someone who looks good in hats model it for me so I can show how happy it would make anyone who wears it.

Next Project
I have no idea.

Actually, I have lots of ideas, I just don’t know which one I’ll pursue.

Readers’ Comments/Questions
Mhairi asks, “The cap looks good, but can I ask, what is faux rib?”

Faux rib can be a lot of things. The first faux rib I did was on my sock knitting machine. I deactivated every third needle, and the small gap created in the fabric created the look of a 2×1 rib. But in the case of the hat I just finished, it’s basically a sl1, P1 on the first round and an all knit on the second, which has two benefits. One, it’s simpler to do than ribbing because every other round is a simple knit round, and two, it doesn’t stretch/pull in as much as regular rib, wich is exactly what I was looking for in this fabric.