Sometimes I ask myself whether I’d rather get what I want, or be right.

Harrowing Escape From My Own Stupidity
I was stopped for speeding last night in Latham, New York.

I was following two cars on the “Northway” (going South) who were going about 75 mph in a 55 mph zone. The guy directly in front of me and I both spotted a police car on the side of the highway at the same time and slowed down quickly. The policeman stopped me.

When he came to my car, he told me he clocked me going 91 mph. I told him I was absolutely not going that fast and that he either clocked someone else, or his radar was broken. His follow-up comments gave me the impression that he might have exaggerated my speed since I was from out of state, and not likely to contest the ticket. As part of my apology of stupidly speeding, I let him know that I was up in the Albany area every week.

He took my license and registration back to his car and returned to my window about five minutes later without a ticket.

When he emphatically repeated that I was going 91, but he was feeling generous and wouldn’t give me a ticket, I seriously considered arguing the point about my speed.

Then sanity returned, and I thanked him with as much sincerity as I could muster.

But the whole situation left me highly pissed off, and unsatisfied.

Current Knitting
I’m floundering right now as to what to knit. The yarn I want to make my next sweater out of isn’t completely spun/plied yet (as you’ll read below), and I don’t want to make more scarves or hats or small projects.

I decided to pull out the original lace project that I tried starting a while ago, and last night and this morning, I picked up around 240 stitches from the waste yarn, and unraveled the six rows of lace knitting I screwed up before throwing the whole project in a bag.

It might be too complex to start at the moment, but I didn’t feel like working on anything else.

Non-Knitting Activities
I focused a lot of my time this weekend on spinning and got a great deal done. 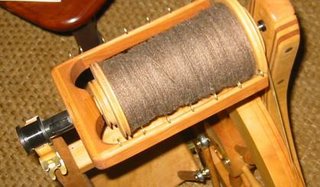 I’m almost done filling all three bobbins. Since I was trying to determine how I would set up the three bobbins for triple plying, I wanted to check to see if I could modify my shoebox lazy kate to hold three bobbins.

While the length would hold three bobbins (just barely), the width isn’t enough to handle the bobbins from my Robin wheel. They are significantly longer than my Louet bobbins, so I’ll have to create a new lazy kate.

I’ve also been focusing some of my time on my latest book, which I just finished. 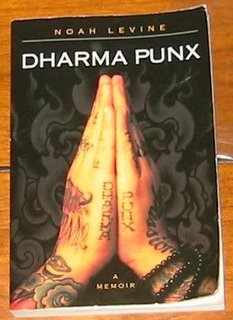 Dharma Punx by Noah Levine is a memoir of his life going from a teenager involved in punk music that takes him into a drug addiction and juvenile detention centers, to a self-actualized meditation instructor.

I found the writing to be simplistic and the editing wasn’t very crisp. Many of the morals he draws from his travels I found to be mundane for someone who has clearly gone from hopeless to enlightened in the course of a memoir. However, I thought the story made up for the writing, the editing and the moralizing. I found the story real and compelling and intimate, and I also found myself relating to the author despite very dissimilar backgrounds and histories. I was glad to have read this little gem.

Readers’ Comments/Questions
I quote Marilyn’s comments from yesterday in total for two reasons:

“Not a geek, not a dork. Joe is the preppiest gay guy I ever met but he does it with such panache. And then throws the whole image off balance by using those little hocus-pocus needles. That’s why I love him.

I would not want to be Ms. Blog Popularity. If the masses loved me that much, I’d be doing something wrong and not being true to my cranky self. Besides, as Joe says, who wants to have to satisfy the masses? I write for me and if people read it, great. If not, that’s fine too.”