Your birthday wishes and personal wishes from family and blog friends were truly appreciated, and for some reason meant a lot more this year than in prior years.

Best Birthday Present
Actually, the nicest part of my birthday was that Thaddeus had hidden a birthday card in my car, so that I would have something to open. It was nice to feel connected even though we’re so far apart.

But second place, was Tom Delay’s personal birthday gift to me.

I can’t tell you how great it is that that slimey bastard is slithering away in disgrace. Good riddance to one of the nastiest pricks that has ever been elected to national office.

Current Knitting
Despite having to work until midnight last night, I did get some additional work done on the Bird’s Eye lace shawl. 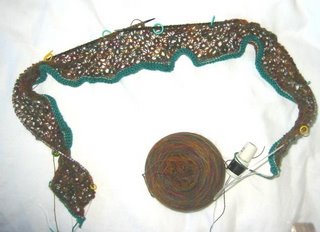 If I ever finish this one, it will be pretty spectacular. 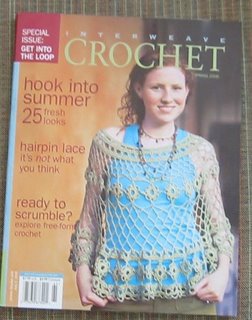 Kathy did a Kaffe/Brandon-inspired crochet blanket that is exquisite in terms of colors. It was worth the purchase price for that design alone.

Which is a good thing, because that is the only design in the entire magazine that’s worth anything. The stark contrast between Kathy’s design and the other dreck in the magazine is striking. Interweave tries to bastardize even Kathy’s design by calling Koigu “superwash,” but don’t believe them. It holds up in the wash, but it is definitely NOT superwash.

Readers’ Comments/Questions
Duffy writes, “Bother with Dunkin’; revel that you have a HONKIN’ big hank of handspun!”

This was one of my favorite comments, and I was even able to hear it in my mind’s ear with an accent based on how she wrote it.

JoVE writes, “The plus side of your horrible experience might be that smart people are actually getting jobs that require there smarts instead of being forced to work at DD to pay the rent.”

The sad part is that directly across the street from this place is a large New York state college where you’d think there would be scads of eager, bright young folks who would want to make a little spending money.

Marilyn asks, “Your yarn is absolutely gorgeous. I forget–what are you planning to do with it? I’ve got MDS&W on my brain. Are you going?”

I’m going to make a faux-ribbed pullover with the newly spun yarn, as long as the swatch makes a good fabric. As for MDS&W, I don’t think I’ll be going this year, but that could change as well.

Michelene posits, “Joe, I work in education (though I’m not a teacher),and I’m more inclined to believe the state of parenting in this country has caused a generation of morons.”

Excellent point, and I agree wholeheartedly with this, and I should have put the blame where it belongs, thanks.