I have never had a very strong aptitude for playing or listening critically to music, but nothing moves me more than being present for a live music performance.

My Only Respite This Past Weekend
I ended up working most of this past weekend, but I decided to steal away some time on Saturday night to join a friend up in the Albany area for a musical performance at the Capital District Gay and Lesbian Community Center in Albany, NY.

Two guitarists/singer/songwriters played to a very intimate audience of about 25 people, and they were both spectacular.

Jules Piper played a set of about 12 songs that were mournful, touching and deeply personal, especially in the small setting of the community center performance space. She is by far the hottest lesbian I have ever seen (could be it’s because she’s so boyish looking that I find her look so appealing).

I didn’t see anywhere on her MySpace site where her scheduled appearances are, but if you can get a chance to see her perform, you will not be dissappointed.

The second act was another short set by Mieka Pauley. Mieka’s music is just splendid. She uses a guitar to its best advantage and combines it with a voice that is incredibly beautiful. Her songwriting is inspired and I didn’t hear one song from her that I didn’t completely love. I don’t know how we got so lucky to see such an incredible performer in such a small venue. She does have a schedule of upcoming shows on her site, and she’s slated to be in Philadelphia tomorrow. I can only highly recommend the experience.

Both artists had CD’s for sale at the show and I picked up all three (Jules had one and Mieka had two).

I know that the experience of live music isn’t something explained well in writing, but I can only say that you won’t be the same after seeing either of these two amazing performers.

Current Knitting
I actually got in some quality knitting time yesterday and added maybe another inch to the Faux Rib sweater. 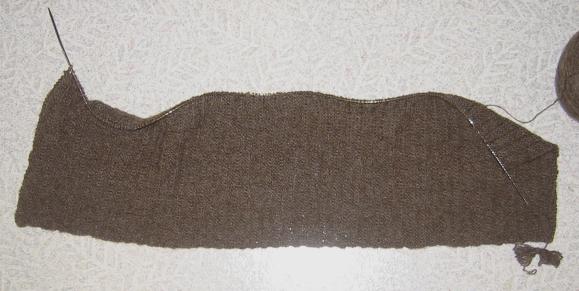 I’ve been toying with the idea of using the “wrong side” as the “right side”, but I’ve pretty much eliminated this idea. Here’s a small closeup of the reverse side of the fabric. 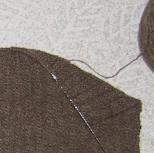 The only thing I don’t like about it, is that it shows inconsistencies in my spinning, and that is just plain unacceptable.