A nice, relaxing weekend at home with Thaddeus has been extremely therapeutic.

Homesickness
It’s amazing how just three weeks away from home can make me feel so lonely and sad…even when I have planned for it for over a month.

During the last week of the three week “go-live” of the project I’m working on, work continued to be extremely stressful and in addition, I was longing more and more to be home and with Thaddeus.

The funny thing is that we didn’t do anything special when I finally got home. It turned out to be a relatively routine weekend. But it did more for this guy’s soul than you could possibly imagine.

So glad to be back to a more normal work/home life.

Current Knitting
I did get more knitting done on the Faux Ribbed Sweater this weekend. 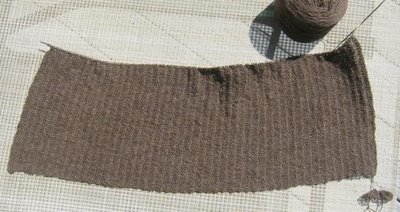 I’m up to nine and a half inches so far, and it’s looking quite fine.

I’m still in a bit of a quandry as to which side of the fabric to use as the public side. Here’s a couple of closeup pictures of both sides. 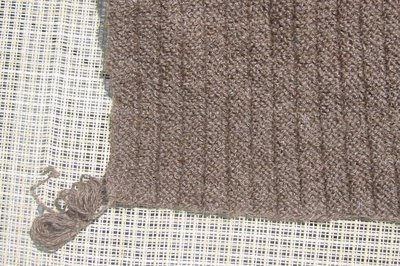 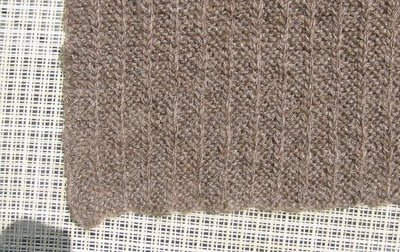 I’d be interested to hear opinions on which fabric they prefer for a simple man’s pullover.

Readers’ Comments/Questions
Regarding the handspun Blueface Leicester I’m using for my current sweater, Jacquie says, “Inconsistencies in spinning? Joe, that’s as Republican a comment as I’ve ever heard. Inconsistency in spinning is the whole point. Handspun is spun by hand and feels like hands do, utterly delicious on the body. Is this sweater not for your lovie?”

And in answer to your question, the sweater will be for both Thaddeus and I. It’s the one garment that we can both wear the same size and styles.