Is that an oxymoron?

Bush’s Ratings Fall Still Further
I hate to get my hopes up again, because November seems so far away. But all I can hope is that when Democrats take over Congress, a law will be passed allowing Laura to take on her natural role in the relationship. 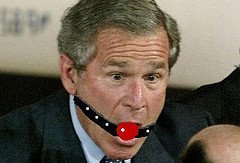 Current Knitting
As hoped, I was able to get past the sleeve shaping on the first side of the Faux Rib sweater. 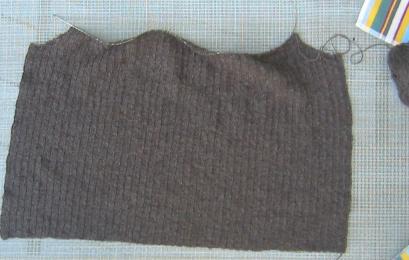 Comment Bavarde
In French, this would mean “how talkative,” but it makes a nice double entendre for the amount of activity on comments this weekend.

I considered telling folks to get a nice big cup of “shut your fucking pie holes,” but I figured it would all work out fine. And then Jacquie comes along and writes pretty much what I would have anyway (except I would have used more profanities and been more succinct). Thank you Jacquie.

One interesting thing I learned about myself during it all.

I just found it surprising the size of my reaction.

I’ll need to discuss this with my therapist.

Weekend Joy
Two birthday-related events happened this past weekend, despite the fact that my birthday was over a month ago.

The first one was expected and lovely. My friend Charles took Thaddeus and I out to dinner for my birthday. This is a birthday tradition, and it’s always a nice time. With my hectic work schedule, it was just impossible to schedule it any sooner than this past weekend.

The second event was a complete surprise and also perfectly lovely. James sent me a birthday gift (well, three gifts and card, to be exact). 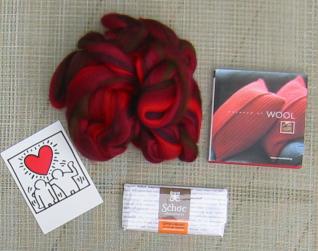 Let me tell you, it’s nice having knit-blog friends, but there are none as generous as my Kiwi pal James. A small book on Wool, which I haven’t had an opportunity to peruse much yet, another block of that incredible Schoc Chocolate (this one is labeled as “Coffee and Walnuts”…yum!) and 100 grams of a spectacularly beautiful roving from Little Wool Company. The colorway is Boysenberry, but the photo doesn’t do this justice. It’s mostly eggplant colored with soft streaks of navy, olive and smokey fuscia and then bold splashes of phosphorescent red.

I can’t wait to see how this spins up.