Every once in a while I take a step back and realize how obscene the spending habits of some Americans are…including my own.

How Is American Spending Perceived Elsewhere?
I worked for a client who designed and manufactured control devices for personal computers and video games (things like mouses, web cams, joy sticks, etc.).

All of their actual manufacturing took place in China.

The head of Global Human Resources for the firm told us a story about one of the factory workers in China. Many of the rural Chinese will come to live at the factories of large companies (like my client) for a year or two to make money that will be brought back to their farm and family when they return home. One of the factory workers who lived in a factory dormitory while he was away from his farm, died of natural causes. His entire town of about 200 people came to the factory to picket and protest the company, asking for restitution for their community-member’s death.

Since the employee’s death had nothing to do with working conditions or anything for which the company was liable, the company ignored the protests. After a few weeks, when the 200 people refused to give up, the issue was escalated to corporate Human Resource management in the U.S. The Americans asked the local factory management to find out what restitution the protesters were looking for. When they found out the cost of having them end their protest was the equivalent of about US$500, they obviously paid the demands and closed the issue.

As I opened a birthday gift this past weekend, and half-ignored a $3 stuffed animal that my friend Charles had used as part of the wrapping, I tried to imagine what the folks in China thought of this insignificant luxury that Americans could throw money away on, as they sewed and stuffed them with speed and agility, hundreds at a time.

Are they envious? Do they find us foolish? Do they question it at all?

I saw this license plate on a car last week, and thought, “What moron would pay for such a stupid vanity plate, unless the irony was intended?”

Current Knitting
I’ve made some additional unremarkable and photo-unworthy progress on the Faux Rib sweater.

I’ll post pictures whenever noticeable changes have been made.

Other Obscene Spending
I made it to the local flea market this past weekend, and on Saturday, I made a couple of knitting-related purchases.

The first purchase was for three not-so-great knitting magazines.

I had to wait for the seller while she gabbed with the woman at the next table. When I asked how much the magazines were, she said 25 cents each. I gave her a dollar for the three of them. I turned to Thaddeus and said, “She clearly just isn’t trying.”

Then Thaddeus spotted this. 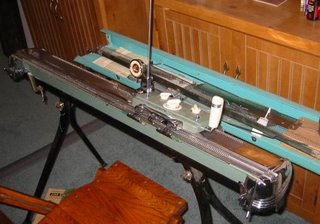 This is a Brother-Knit machine that I picked up for $30. It has all the critical pieces, including the instruction manual and most of the tools. I set it up immediately and I love all the vintage chrome and aqua. I need to oil it up a little, but it seems to work just fine. Can’t wait to get home and play with it a little more.

Readers’ Comments Questions
Thank you Lucia for the graph of the idiot’s poll numbers. Not only was it beautiful, but it was…well, beautiful.

With regard to the roving that James sent me, k asks, “I love the Boysenberry. What’s it going to be?”

I’m thinking that I want the colors to remain as distinct as possible, so I will probably spin this loosely and at about a worsted weight. I’m not sure what I can make with approximately 100 grams of worsted weight. I think I’ll wait until I know the yardage and then decide.

Also concerning the gorgeous roving, Jacquie asks, “Where did he get it? I came up with http://www.annagratton.co.nz/ but I didn’t see any roving listed.

Yes, this looks like the right site. If you look on her on-line catalog under sliver you’ll see Boysonberry listed. And let me tell you, the colors are ten times as beautiful as my pathetic picture. Indescribably beautiful.

Regarding conservative comments from the other day, Anne Marie asks, “Can she be blocked from commenting on anyone’s blog?”

I have the ability to block commenters, although I’ve never done it. I actually thought Susan’s initial point had some merit, and if I banned everyone that insulted other commenters, I wouldn’t have many left. Like Lisa, I’m not a big fan of blowhards other than myself, but you all know I encourage differing opinions even when I don’t agree with them.