If I Say It Enough Times…

Are Americans so stupid and lazy that they take our president’s word about the piece-of-shit prescription drug plan that was put in place in January of this year?

I Don’t Buy It
President Bush included the following in a speech:

“The more choices you have, the more likely it is you’d be able to find a program that suits your specific needs. In other words, one size fits all is not a consumer-friendly program.”

“This is a good deal for American seniors.”

I used to deal with a lot of seniors in my first job as a billing/insurance coordinator for a large chiropractic clinic. While sometimes they pretended to not understand things, for the most part I felt like a pathetic beginner when I dealt with their insurance and billing needs.

So, I have to believe that having to deal with a comlex and confusing prescription drug program that was built to support the drug companies and not the seniors, was a pain in the neck for most of the folks on medicare. Republicans left us all out to dry by completely eliminating the ability to negotiate large-volume prices with the drug companies for no apparent reason, other than the obvious assumption of payback for campaign contributions.

If all this wasn’t true, why the hell would Bush be out on the campaign trail promoting such a miserably bad plan?

Current Knitting
I got a little more done on the Faux Rib sweater, and possibly even enough to show in a picture. 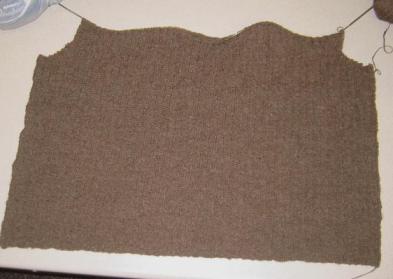 Financial and Fiber Worlds Collide
Where else than on this blog could folks have incredibly well-informed conversations about both financial issues and fiber issues?

Well, one of the investments I own sent me this report. 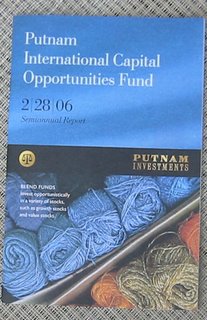 I have to admit, it was a nice surprise seeing a picture of yarn on something other than a catalog. The small writing mentions something about Blended Funds, but nothing about yarn.

Readers’ Comments/Questions
Ann asks, “How do you decide how much roving to get? Do you get enough for a particular project? Or just to do a test spin?”

When I first started spinning, I got some very good advice from one of the places I bought fiber. She basically told me that I should decide on amount in the same way I decide on how much yarn to buy. If I saw a yarn that I wanted to make a sweater out of, I’d buy enough yardage for a sweater’s-worth. A scarf, a shawl, underwear, I’d buy the appropriate amount. With roving, I translate the yardage based on the anticipated gauge of yarn I hope to make to ounces, and buy appropriately. I usually add about four ounces or so to the sweater calculation.