This is the first step in ousting the biggest embarrassment Pennsylvanians have ever had to endure, Rick Santorum.

Casey Wins With 85%
Despite some conservative views, especially on abortion, Bob Casey has been given a clear “thumbs up” from Pennsylvania Democrats as our candidate to beat Santorum in November.

Casey astutely assessed the results of the election with this statement:

“Tonight voters from across the state overwhelmingly showed President Bush, Rick Santorum and the whole ‘wrong direction’ gang in Washington that the values that unite us as Democrats are stronger than anything that might divide us.”

I can only say, from his lips, to God’s ears.

Current Knitting
I’ve finished about 23 inches of the back of the Faux Rib sweater, and I’m moving along quite well. I actually could have included a picture today if I had gotten my ass in gear and taken one.

Spinning Choices
Last I wrote about spinning, I was debating on which fiber to spin first. Most folks voted for the deep red sliver I got from James, and others voted for Carol’s “Flame” dyed roving.

I took your advice.

I spun some of both.

I started with the deep red roving and it spun up beautifully. The fiber just seemed to fly onto the bobbin in a nice lofty single. 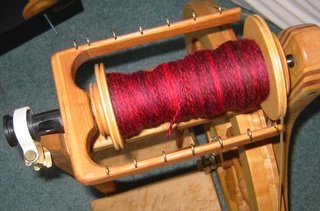 And then I double-plied it, also loosely and came up with a beautiful deep red tweedy yarn that I just love. 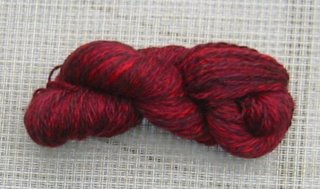 This hank turned out to be about 280 yards of light worsted weight yarn. I’m still not sure what it will become, but whatever it turns into will be beautiful. 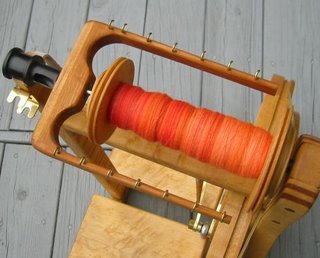 What is Targhee? It reminds me a lot of Merino, but it’s a lot easier to spin finely and loosely. Switching from the New Zealand fiber to this took me a couple of seconds to get used to, but now it’s moving along quickly.

It’s also surprising that while some yarns get darker when spun, this yarn is looking more like a Creamsicle than any flame I’ve ever seen.

I’ve decided to double-ply this into what will probably end up being a lightweight DK yarn. Again, I have no idea what I’ll make of the resulting yarn.