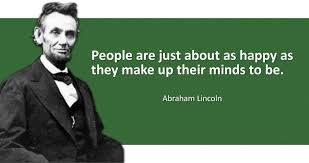 “Most people are about as happy as they make up their minds to be.”
Abraham Lincoln

It’s The Journey, Stupid
I have to keep reminding myself that happiness isn’t a destination, and that it’s the times while pursuing life goals that happiness occurs.

I get very wary of people who tell me that they’ve achieved happiness, especially when their happiness is founded on something or someone.

I also shy away from folks that are always happy, because I figure they’re either on drugs or faking it. While I sometimes have difficulty distinguishing between them, I make a strong distinction between addictive euphoria and happiness.

Sorry to pontificate, but I’ve been doing a lot of self-examination lately, and sometimes I find working out my thoughts in writing helps to clarify them for me.

Current Knitting
I got some additional work done on the front of the Faux Rib sweater.

I’m now up to about three inches out of the twenty-six inches I have to do. But I figure that’s not bad considering that it’s weekday knitting time which is more rare than weekend knitting time for me.

Beautiful Knitting
Reader Jacquie (the one who called me a Republican for being concerned about the uniformity of my Blueface Leicester spinning), has recently posted a picture of a lace baby blanket she knit using Suri Alpaca yarn, and it’s spectacularly beautiful.

The pattern she used is “Christening Chrysalis” by Priscilla Gibson-Roberts in The Best of Knitter’s Magazine, and it truly shows off the incredible luster of the Suri yarn.

Her work has convinced me I need to get me some of that Suri and knit me up a batch of something with it.

Readers’ Comments/Questions
In addition to adding valuable comments about handspinning, Ted asks, “How do you maintain grist consistency in a batch of yarn? Do you keep a sample by the wheel and compare with it every so often, or you just eyeball it and hope you’re not drifting too far away from what you have in mind?”

Up until now, I have never kept a sample, I just eyeball it. I sometimes end up with inconsistent results, but usually I have a relatively consistent grist throughout a batch of spinning. The inconsistencies have never had a significant impact in my knitting. At one point, I think I will attempt to be vigilant in maintaining a consistency in my spinning, if to only show to myself that I can. But for right now, the spinning is more about the enjoyment than the resulting yarn.

Concerning the white roving, Duffy asks, “So you figure you’ll get another huge honkin’ hank o’handspun from your huge honkin’ pile of roving?”

I figure that with over five pounds of roving, I will easily have at least three large sweater’s worth of yarn after all is said an done. I plan on spinning my singles a little less finely so that I can get through it a little more quickly and end up with a light Aran weight or maybe DK weight yarn.