First of all, most folks agree, Marriage might need defending, but not against expanding it to include all people.

My Ideas on Gay Marriage
Marriage in this country is a civil action that binds two people legally in lots of different ways. Some beneficial, some not so much. Marriage also can have a community or religious significance.

I’ve said this before, but I think that this country ought to eliminate marriage as a civil activity altogether, and replace it with some form of domestic partnership for anyone wanting the bonds of legality, currently bestowed on legally married couples.

Let religion or community organizers have marriage all to themselves. Make marriage a religious or social committment that allows each group or religion to define it as they will. I’d be interested to see how strong the spiritual bond would be without a corresponding threat of legal divorce attached to it.

I understand how church and state have been combined on the idea of marriage, but like any other combinations of those two areas, they should be divorced of each other, so to speak. That way, all the ruckus about sanctity and morality of two men marrying will be only between the religions that allow it and the religions that don’t.

Marriage Benefits
There is something to be said for the community pressure to help married couples stay together. Maybe not as much in this country as in countries like China, or India. But there are significant practical incentives that married couples have for staying together as well. I just wanted to list a few areas where married couples gain benefits that aren’t allowed to folks like me and Thaddeus:

1. Medical power of attorney.
If I were to be hit by a drunk driver and go into a coma, Thaddeus would have no legal rights to dictate how my medical care would proceed. In fact, my family could dissallow him from even visiting me in the hospital if I couldn’t speak for myself (or hadn’t already done so in legal documents).

2. Funereal Arrangements
If I were to progress from coma to death, Thaddeus could be denied any determination in how my funeral arrangements are carried out.

3. Survivor Benefits – Social Security
If the bread-winner in a marriage dies, the spouse is granted survivor benefits. If I were to die, Thaddeus would get nothing.

4. Survivor Benefits – Defined Pension Plans
Most old-style pension plans will pay out a pension to a surviving spouse of the plan participant. I am eligible to receive a pretty decent pension starting as early as age 55 from my last company, but if I die two days before my 55th birthday, Thaddeus would get nothing from the plan, as opposed to a wife who would receive pension benefits for the rest of her life.

5. Inheritance tax
All that I own, or that Thaddeus and I own jointly is subject to inheritance tax, including our house and everything in it. A legal spouse doesn’t have to worry about any of the same tax.

Don’t get me wrong, there are some negative burdens associated with legal marriage…mostly if things don’t go well in the relationship, but I feel significantly cheated by not being about to legally bind ourselves as a couple.

Current Knitting
Moving along, but if I post one more picture of a block of knitting, I think folks will fall instantly asleep from massive boredom. Next picture will be next week probably and hopefully have some arm hole shaping. Now won’t that be riveting?

Books & Magazines
I was at Barnes & Noble recently and picked up a couple of fiber-related items.

The first thing I found was the English translation of Knitting Out Of Africa, by Marianne Isager. 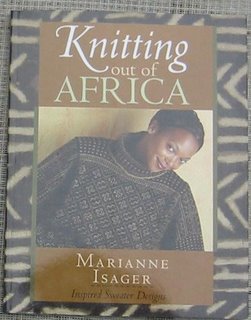 I already have the Danish version of it, but this is one of the few books where I might actually knit someone else’s design, and I wanted to be able to read the pattern in English.

I also picked up Crochet! Magazine. 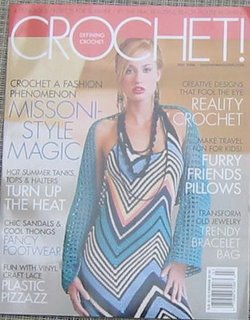 I’m not sure why, but the Knitting Magazines were dreadful, and I’ve had a yen to try out some crochet designs. There were a couple of decent designs ideas in the magazine, but nothing really worth making as shown.

Readers’ Comments/Questions
Lucia notes, “You may want to read Dale Carpenter’s posts at The Volokh Conspiracy also. That’s where you’ll find the right wing arguments against the amendment.

Thanks for the link. Very interesting discussions with incredibly well-thought out arguments.

Marilyn states, “That Romney is absolutely the epitome of creamy, yarny, handspun goodness…I’d love to design a gansey for that stuff! And you’re planning what with it?”

First of all, if the words “creamy, yarny, handspun goodness” appear in your book, I will either not buy it, or return it for a refund or burn it, depending on how I feel. Second, I’m not sure what I’ll do with the yarn, but I’m thinking about having it dyed and knitting sweaters out of it. I will definitely have enough to give away to an Aran designer, if she’s really interested. It would make a nice “fisherman’s sweater”, but I’d fear the gauge of the yarn wouldn’t be useful if the design was going to be published or sold.