The “Independent” counsel has cleared Rove on possible charges that he leaked the name of a CIA operative during a time of war.

Huh?
How could this be? Karl Rove leaked Valerie Plames’ name as a CIA operative. Then, he lied about it to a grand jury. These are a known facts. The leak is an illegal act. How independent is this counsel if they can’t see this clearly as a crime? Lewis “Scooter” Libby did the same thing, and he’s been indicted for his crime.

Thank God for Howard Dean Charles Schumer who were two of the few to express the appropriate outrage about this.

The so-called Independent Counsel hasn’t said he didn’t do any of these things, they have just notified Rove’s lawyers that they won’t be seeking an indictment.

Righteous man, New Gingrich weighed in with, “The president is looking a little better, a little stronger. Certainly for the White House and for Karl Rove this is a very important morning and a very positive one.” No Newt, this is travesty and a flouting of justice, and I can only imagine the outrage will even further weaken this poor excuse for a president.

This is downright sinful, in the true sense of the word, and both conservatives and liberals should be outraged by this injustice. Where’s the moral outrage from the righteous Christians? Isn’t this worse than a blow-job in the Oval Office?

The Faux Rib sweater has another inch or two added on, and soon I’ll be starting the neck shaping. 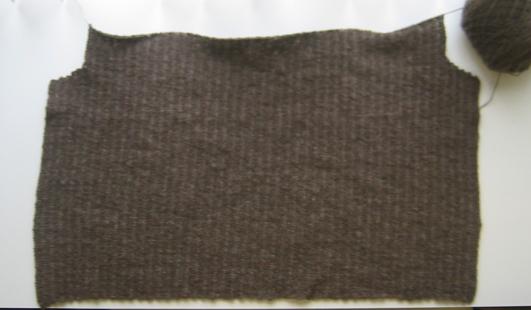 I’ll be glad to start on the sleeves for this sweater.

Readers’ Comments/Questions
Regarding the Faux Rib sweater, Linda asks, “Could you tell us how you do the reversible seaming once you get it done?”

Yes, if it works out, I’ll detail how I did it, with pictures and everything.

Erica, in a daze of moving asks a number of questions, “I must have missed it somewhere in the last couple weeks where you said you were leaving (I was in the middle of a move from Sacramento to Seattle, so I’ve been missing my daily blog reading a lot). Where are you moving to? Did you say that somewhere? Did you get a new job? Is this permanent?”

I live in Pennsylvania and I have been working in Albany, NY on a long-term project for the last three years or so (I commute up every week and go home on weekends). My on-site project time is finishing up at the end of this month. For the following three months (July – September), I will be working for the same client, but I’ll be working from home. I won’t know who my next client is until a few weeks before the beginning of October.

Kathyhm writes, “Hi QJ: its a terrible thing to anticipate a new post by your fave blogger and then… no new post. Hope you’re doing scandalously shrewd things you’ll tell us about later.”

This is my third day in a row with a blog entry, so I’m not quite sure what you expect in terms of frequency. I typically post 3 or 4 entries per week, and rarely on the weekends.

Linda B asks, “Re. reversible sweater shoulder seams. Can you graft those seams?” and then follows up with “The sleeve seam still defeats me, although if you have figured out the side seams, won’t the same method apply to the sleeves?”

Grafting might be the way to go on the shoulders, so I’ll probably try that first. The side seam might be similar to the long seam to close the sleeve, but not for sewing the sleeve into the sleeve opening. I’m going to have to experiment with that.

Christina offers the following advice, “Hey Joe, regarding crying at work: sometimes it just happens because of hormones, or stress, or a tramatic event, or any combination thereof. It is not because the person is extremely unprofessional, it is because they are emotionally overwhelmed (like someone they care about leaving). Try to be empathic.”

I actually don’t mind when folks cry at work, but I do think that it makes them look less professional. In this country, crying in the workplace usually makes the crier look weak or manipulative, and there are other ways to express hormonal surges, stress or trauma that are more professionally acceptable. That being said, I will have a big box of Kleenex with me when I say goodbye.