Now that life has settled down a little, I can get back to writing. I’ve missed it.

Cut-And-Run Democrats
What the fuck is wrong with Democrats today. So few of them have any spine at all.

We’re in a war costing this country BILLIONS of dollars with the sole purpose of bringing democracy to a country, when this country’s democracy is eroding every day because of civil rights and constitutional crimes by our president.

When one of the clone-Republicans asks a Democrat if s/he wants to cut and run, the clear answer should, “No…I want to cut and run like hell.”

We shouldn’t be in this war, and it’s only making things worse for both the Iraqis and us by being there. Cut our losses, withdraw troops and get us the hell out of there.

Current Knitting
I made a little progress on the first sleeve of the Faux Rib sweater. 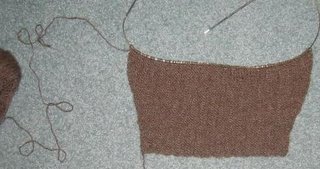 I know it’s not much, but things should progress a little faster now that I’m on vacation and then I’ll be working from home. 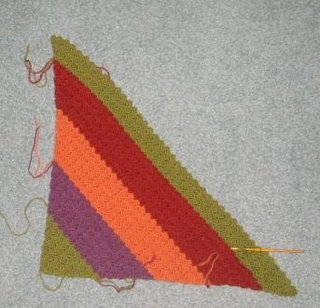 I’m really enjoying this stitch. I’m thinking I probably should have used a slightly larger crochet hook for this particular yarn, but even as it is, the mini-afghan is pretty good.

Readers’ Comments/Questions
Regarding my getting sick last week, Cat notes, “Sorry to tell you this, Joe, but the sinus/respiratory thing lasts a good three weeks.”

I can’t imagine how folks could diagnose something like this based on the description of it that I gave, but fortunately, it only lasted intensely for a day. I still have small remnants of it, but it’s on it’s last legs.

Regarding the flooding in New Hope that made national news, Betsy says, “Hope you and Thad weather the floods and that all your local haunts are able to open again soon…”

Where I live in New Hope doesn’t get affected by the floods. This flood was bad mostly because it’s the third one in two years, but it wasn’t quite as bad as the last one in terms of damage to businesses on Main Street.