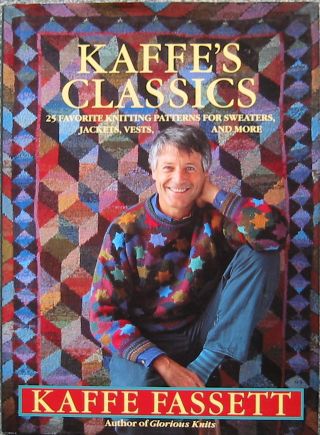 The Beauty of Kaffe

Two events had me in complete bewilderment as to how Kaffe can sustain such a long-running creation of beautiful things.

Fabric Browsing
I had the incredible opportunity to meander through stacks and stacks of fabrics yesterday at Liza’s. I wanted to find some backing for the pillow shams I’m making to replace the hideous white pillows shown in the picture.

Years ago, when I first started knitting with colors, I started almost immediately with a Kaffe waistcoat. I didn’t realize how difficult intarsia was supposed to be, so it turned out to be rather easy. Like Ted mentioned in comments about perseverance, even lace knitting isn’t difficult, it just requires the commitment to finishing it.

Similarly, when I stepped into the world of quilting, I started right with Kaffe fabrics. The best part about that was, it wasn’t any more difficult using Kaffe fabrics on a simple quilt (and the Snowball design is very easy), and the results were equally as stunning.

Anyone interested in starting to quilt, or getting back into it, should definitely check out some of the designs on Liza’s web site. Most of them are quite simple and yet they turn out incredibly well.

Book Store Find
The other Kaffe event occurred during a walk through a used book store in Doylestown, Pennsylvania. I found this book for US$2. 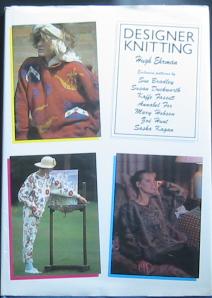 Most of the designs are dreadful, but the reason I had to buy it was for this picture of Kaffe in the bio section at the beginning of the book. 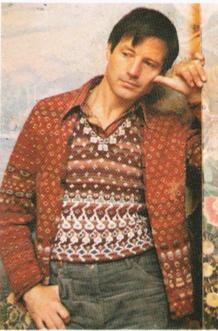 Current Knitting
I made quite a bit of progress on the second sleeve. I’m up to about eight inches and 103 stitches across.

Second Class Citizens
In light of the New York State Supreme Court decision, and reactions from folks like Lars, I decided to post this cartoon that Ted sent me.

Knew Knitting Knick Knacks
Reader Jodi sent me the link to this new idea she’s marketing, and I thought it might be useful for other readers to know about this.

Check out her new knit-organizing kit. I especially love the knitminder idea for labels.

Readers’ Comments/Questions
Helena asks, “What did you think of The DaVinci Code? Did you read the book before seeing the movie?”

I haven’t read the book, but I enjoyed the movie. Like most Ron Howard movies, it was a little too neat of a package, but it was my favorite of his movies so far. I also am not a big fan of Tom Hanks as an actor, and I thought he did a good job in the movie.

Also on a movie theme, Michelene asks, “Joe, did you see Pirates of the Carribean yet?”

Yes, Thaddeus and I saw that this past Sunday night. I enjoyed it, but found the story lacking any substance whatsoever. I’m hopeful that the third movie will be a little bit more interesting from a story perspective. Johnny Depp was excellent, as always.