Bill Clinton Is A Latent Homosexual
When everyone was saying how awful it was that President Clinton got a knob washing in the Oval Office, my thought was always, “Shit!, he’s the President of the United States, I’d blow him if he was into it!”

But now it seems that the media whore, plagiarist has made another audacious claim to sell her piece-of-shit book. Yes, that he’s gay.

Makes me only want to re-elect him more.

Check out this site for a funny “audacious” commentary about the bony skin-bag (but it’s not appropriate for children or at work).

Although my favorite commentary about her, is that she was invited to a “news” show to provide punditry on the Israeli/Lebanon war, and it was clear she was only there to sell books. The commentator asked the first question, and the oh-so-bright Coulter responded with, “I haven’t been reading the news for the last week.”

I just wish the news shows would stop putting her on as a political expert. She’s a media whore, who is willing to say anything to sell her crap.

Current Knitting
I’ve continued work on the pink baby blanket, and that’s pretty much all I’ve worked on when I’ve had the chance to knit.

I’ve finished five pattern repeats, which is about 7 inches of blanket. Still about 28 more inches to go.

This Year’s Bug
Remember last year around this time last year, I saw some heinous bug on my front screen? 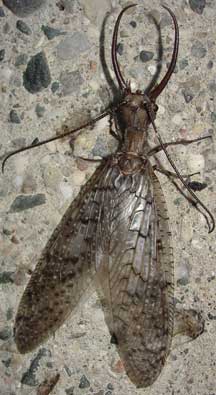 That was a male Dobson fly. This year’s specialty bug is the Imperial Moth.

Readers’ Comments/Questions
Donna asks, “I know you’ve probably mentioned it before, but I’m wondering what you’re planning on doing with the seemingly never ending Romney? Are you doing a big project? Trying your hand at dyeing?”

I’m not sure yet. I’m definitely not going to dye this myself. Way too messy and involved. I’ve got some ideas running around in my head, but nothing definite yet.

Regarding my example of how not to correspond with a blogger, Janet offers, “In other words Joe (especially but not exclusively) why is it appropriate to respond to someone with such venom? I suggest you consider taking a (figurative) step back; refrain from ‘bitchiness’ (either overt or covert) in your response and put this rather harmless request into a mental bin marked “not worth becoming nasty about?”

One other thing I find offensive, is folks that try to tell me how to write my blog (or even worse, how to feel or think). If you want to read less bitchy knitting blogs, there are plenty of them out there and many of them are way better than mine. Perhaps I should have put your comment in the same “mental bin” as I should have put Sharon’s, but that’s not how I react.