What Is A Blog?

Is it a self-glorifying begging for attention from readers, or is it a forum for sharing ideas and inspiring folks, or something somewhere in between?

Intentions
Initially, I decided to start a web log based on a number of different factors.

1. I wanted to document my knitting.
2. I wanted to see if I could consolidate a group of interesting, creative readers.
3. Blogging software was readily available, relatively easy to use and free.
4. I had seen Marilyn’s blog, and loved the tone.
5. Wendy’s blog had some interesting knitting and writing that I enjoyed.

QueerJoe has turned into something else since those initial days. I certainly document my knitting, and I believe there is a readership here that is amazingly interesting, intelligent, accomplished, opinionated and creative. I’ve only added two main things to my original intentions, as far as I can tell. First, I have obviously set up a soapbox to spout my liberal, political, queer beliefs. Second, I have been able to market various friends’ wares.

Overall, I’m very happy with how this space has turned out.

Current Reading
The reason I started questioning this, was because of a book I’ve just finished reading, Talk To The Hand by Lynne Truss. 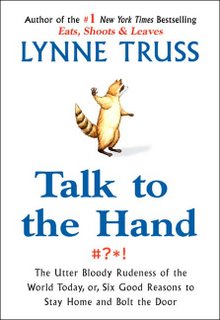 I didn’t enjoy this book very much. I felt like I was reading a meandering, scattered, self-aggrandizing blog, rather than a witty discussion of rudeness today. I agreed with much of what she wrote, but I found her writing difficult to wade through. The book came across as preachy with an attempt to disguise that with self-deprecating humor. Even the self-deprecation came across as a way of focusing attention on the author as opposed to the subject.

Reading this, I started to question what the difference was between her book and my blog, and thus the ruminations about what a blog is today.

Current Knitting/Crocheting/Spinning
First off, I haven’t done any additional work on the Faux Rib pullover. I will get back to it, and finish it up. I just need to sit down and do it.

I did some additional work on the Pink Baby Blanket. I’ll put a picture in the next blog entry.

I mentioned I had done some additional work on the corner-to-corner crochet blanket.

I’m really enjoying this blanket and the crochet process, and now I’m thinking that I’ll need to get some more yarn so that I can make a full-size afghan.

I also mentioned that I’ve done some additional spinning of the Tussah/Cashmere roving that I bought at Twist.

I originally bought two small bags of roving, and I’m almost done with the first bag. Reader John from Portland has the same color roving, and he sent me pictures of the finished yarn and a scarf he’s been making with it. It’s made me want to allocate even more of my time to this heavenly stuff.

Readers’ Comments/Questions
Regarding my comments on the effect of being a strict Catholic on Mel Gibson, Terry asks, “If you are going to make a comment about Catholics as a whole, how does that make you any better than Mel Gibson?”

Most folks know that I consider myself to be a recovering Catholic, and I find the Catholic Church as an organization to be one of the largest hate-mongering organizations when it comes to gays and lesbians. That being said, I apologize for what I wrote yesterday. What I was trying to do, was to show the hypocrisy of Mr. Gibson, when he claims to be so religious, and then his true colors come out in a drunken display. I don’t believe that the church made him that way, and I also don’t believe that all Catholics are bigots, just because he is. Thank you Terry for pointing this out.