I’ve always liked Hilary Clinton, but never moreso than watching her take Rumsfield to task, and calling for his resignation.

Arrogant Prick
Can you imagine him saying that he can’t recall a time during this entire Iraq debacle when he felt he was being overly optimistic?

Nevermind the carefully worded way he puts it, that’s bad enough. But the utter gall of this dick to basically claim he’s made no bad decisions in this entire war is just ludicrous. How about taking a look at troop levels, which have never been large enough to maintain security in Iraq. How about looking at Hummers with no armor? How about seeing all the men an women going to war without proper protective equipment?

Sounds to me like at least one of these situations might have been caused by the head of this war being overly optimistic, no?

Current Knitting
I’m continuing on with the baby blanket, and making good progress.

For those interested in the pattern, here’s a closeup of the fabric which might be able to help you figure out this 12 row pattern repeat.

Flea Market Finds
Combing through piles of junk, I came up on a tied up stack of magazines, and noticed that there was a knit pattern on the bottom of the stack (the top magazine was a Woman’s Day). I figured that there were probably a bunch of other pattern booklets in the stack. I asked the guy how much he wanted, and he said, “I haven’t even looked through them, how about $5?” I said, “For $5, I’ll have to look through the stack.” So he let me have the stack for $3.

After throwing out all I didn’t want, here’s what remained.

It’s basically a collection of patterns and booklets from a pretty mundane knitter who liked Bernat. The book in the top left of the picture is for Fisherman’s Afghans, which I might consider using to make something with the homespun Romney. We’ll see.

Then, the following visit to the flea market, I lucked upon this little stash. 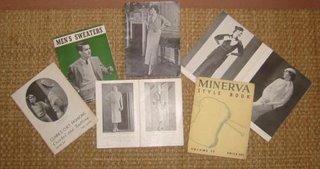 These are pattern booklets from the 1930’s with great vintage stuff, some of which the prior owner actually made, like a three-piece knitted suit. High fashion in vintage knitting. These I considered a true find.

Readers’ Comments/Questions
Regarding the diagonal crochet blanket, Christine asks, “What stitch are you using on that blanket?”

It’s called “corner to corner”, and it’s a lot of fun. I’m doing it with DK weight yarn and a size D hook. Both a finer gauge than the picture in the link, and a denser fabric. Here’s a closeup of the stitch I’m doing.