Could the White House have hosted a more ridiculous representative that was any more hated than Donald?

Let’s Vote Now!
With his scrunched up, scowling face, he spouts incendiary lies that question the patriotism of the folks the question his supreme authority. 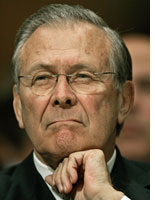 If this is the best our federal fascists can do to help keep Republicans in the house and senate in November, I say give us more.

If you haven’t seen the Olberman commentary on Rumsfeld’s speech, it’s a must-watch/read. Check it out here. It’s about time the media started calling a spade a spade.

Current Knitting
I made some additional progress on the new lace stole, and it’s continuing to look lovely. I’ll post pictures in my next blog entry.

Yes, the bobbins on the Robin wheel are empty, and this can only mean one thing.

The neverending bag is finished!

Yes, I’m finished spinning all the Romney-like fiber I got from my sister-out-of-law.

I’ve labeled each ball with the total length, weight and grist (yards per pound). It all comes to just about four pounds of yarn and about 4,000 yards. At about 1,000 yards per pound (on average), I’ve got a pretty standard worsted weight yarn to work with.

Now I just have to make a decision on what exactly to do with two large sweater’s worth of yarn.

Readers’ Comments/Questions
Rachel asks, “I can’t find your patterns in The Knitting Vault web site. Under what name should I look?”

As Barb noted later in comments, the designer name is under DoublePointed, but you should also check out Lucy Neatby’s designs. I’ve bought a few of her patterns already, and will probably get more, especially if she publishes a beaded scarf that she was designing when I met her…it was being knit on the bias. How about it Fredda, is Lucy going to publish that design on the vault?

kathy notes, “That yarn looks amazing, amazing. Is it a little furry?”

Yes, the yarn is lofty and soft and has a bit of a halo. Not enough to detract from the lace pattern, even without blocking.